Book Club: "The Man He Became" 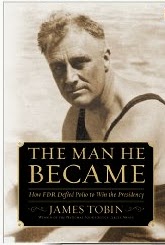 I have started listening to the audiobook of “The Man He Became”, by James Tobin, a new book about Franklin D. Roosevelt’s experience of disability. Specifically, the book chronicles the onset of Roosevelt’s polio in 1921, his rehabilitation … both medically and politically … and his rise to being elected President in 1932. From what I have read about the book, Tobin refutes a lot of popular ideas about FDR’s disability and how he managed peoples’ perceptions of it.

I will write a review / discussion of each of the book’s three parts, on successive Saturdays:

If anyone has read the book, or would like to read along with me, feel free to comment. You can also email me ahead of time if you like so I’ll know whether to expect other people to join the discussion.

If this first "book club" discussion works out, we can move on to other disability-related books, and I'd be open to suggestions for other books to read and discuss.
Posted by apulrang at 4:46 PM