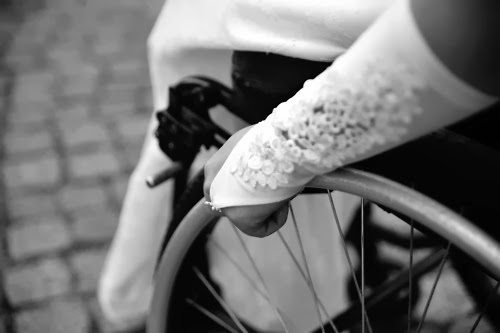 From the Ibrahim Alghamdi Tumblr blog, via The Lame Dame.
Posted by apulrang at 5:10 PM No comments:

It's rare for well-known, "mainstream" Op-Ed columnists to write about disability issues. It's even rarer that they get it completely right. That's partly why I was so pleased to find a link to this Gail Collins column about the UN Convention on the Rights of Persons with Disabilities (CRPD), on Andrea Shettle's Tumblr blog.

I especially like that Collins gets specific about what has so far kept the United States Senate from ratifying this convention. It isn’t about the generic “Do Nothing Congress” theme, although it is a variation of it. It has little to do with what is in the convention and what it would actually do. Rather, it has become another test vote for Republican Senators at risk of being "primaried" in the upcoming election by candidates more right-wing and / or paranoid than they are.

The two main "issues" with the convention itself are, as Collins correctly notes, about sovereignty, and parental rights. Or, to put it more plainly:

1. Certain very conservative Republicans have a long-standing distrust of the United Nations, which by its very nature they envision one day imposing laws and changes on the United States. This disability rights convention is to them just another potential wedge for foreigners to meddle in our business, so they want Senators, especially Republican Senators, to vote against it on anti-UN principle.

2. Certain other (sometimes the same) very conservative and Evangelical Christian Republicans are afraid that a particular phrase in the convention opens the door for the UN to overrule what parents choose to do with their children with disabilities. It seems like one specific thing they worry about is that the UN will someday determine that homeschooling is bad for disabled children, and somehow use that to curtail homeschooling in the United States.

The first objection is just the latest version of a sort of "constitutional" objection that is as old as the UN itself. People of a certain political bent have never liked the United Nations, and distrust the notion of “international law” on principle. They are nationalists who believe that the United States should never in any way acknowledge any authority higher than our own Constitution … even symbolically or for practical reasons like diplomatic cooperation and world peace.

The second issue is a little more complex, but only a little. Homeschoolers, especially, (but not exclusively) Evangelical Christian homeschoolers, feel looked down upon and threatened by the education “establishment”. While some homeschool because they don’t like aspects of public education as it is practiced, others basically don’t like the idea of any “so-called experts” telling them how to raise and teach their kids. Since public schools generally don’t see it as part of their mission to inculcate religious values in children, some Evangelicals opt to take their kids out of the “system” entirely and teach them at home, something that United States law does allow them to do. A somewhat side group of parents have a different problem with schools. Since schools still often do a poor job of handling disabled children, some parents decide to give up trying to improve Special Ed through advocacy, and simply decide to go it alone with their kids, believing that they, the parents, know what’s best for for disabled children.

So, you have two groups of homeschooling parents, groups that only partially overlap, who hear government-type agencies talk about “the best interests of the child” and take it to mean that if some academics and politicians don’t like how they raise their kids, then the law will eventually force them to give up their authority over their children and subject them to an education system they don’t agree with and even fear. They see an international agreement like the CRPD as a stealth way to someday circumvent US laws that so far at least do protect “parents rights”.

Of course, the purpose of the CRPD isn’t to change how the United States deals with disability issues, but to bring other countries closer to how American law currently does. There’s no point in beating around the bush here; we’re talking quite often about Third World countries, and possibly Eastern European countries … which often have cultures with pretty outrageous notions about disability, and / or infrastructures where accessibility is unheard of. And even if down the line, someone were to try and bend the CRPD to make legal changes in US law, it is vanishingly unlikely to ever happen under our current relationship with the United Nations. The US has veto power in at the UN. The only thing we have ever done at the behest of the UN is go to war, and then usually because we got the UN to vote for military action in the first place.

Opposing the CRPD on these ground is high-level jumping at shadows. It is also an insult to the many Republican Senators who aren’t big UN fans, but see this convention as something worth doing. Worst of all, it has caused the United States to symbolically disavow one of the few areas in which we truly are more advanced than much of the rest of the world.

The other problem is that the stakes are so low, in a political sense. It’s just not a big enough deal to get anyone upset in favor of passing the ratification. That’s why someone like Gail Collins writing about it, and well, is so important.
Posted by apulrang at 4:28 PM No comments: