When I saw that the TV show "Ironside" was on Hulu.com, I thought about grad school. My Master's Thesis was on depictions of disability in movies and television, and "Ironside" one of the TV shows I studied. Back in 1990, the show wasn't available on VHS, and this was back in the days of dial-up and 20 megabyte hard drives, so the Internet was no help. I had to spend five days at the Smithsonian Institution in Washington, DC, watching as many archived episodes as I could on reel-to-reel tapes. Actually, I had a great time.

I don't really remember too well what I thought about the portrayal. I think I thought it was fairly positive, and having watched five episodes on Hulu.com so far, I think the same thing today. 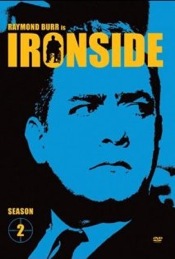 "Ironside" was a one hour police procedural focused on former San Francisco Police Chief, Robert Ironside, who in the pilot episode is shot and paralyzed from the waist down. He doesn't retain his official position, but serves as a quasi-official "special consultant" to the police department. He uses his experience, contacts, and above all his incredible crime-solving intellect to solve mysteries that stump the regular police. Chief Ironside sets up home and office in an old police department building, and is assisted in his work by Det. Sgt. Ed Brown and Officer Eve Whitfield (later a different female Officer, Fran Belding). Mark Sanger, an African-American, (who I think may be a reformed criminal?), is his personal aide and the third member of his investigative team. Ironside uses first a manual wheelchair, later an electric. Early in the series, he gets around town in an old converted armored car, later in an adapted van.

Ironside is portrayed as gruff, crotchety, and funny, with lots of snappy one-liners. Underneath, he's moral and kind. He works as hard to prove the innocence of people he believes in as he does to catch criminals. His personality seems almost completely that of a veteran police chief, and his disability only rarely seems to have altered who he is or how he thinks. In fact, I got the feeling that being accustomed to leading and issuing orders helps a lot in Ironside's ability to adapt to his disability. It's no big deal for him to tell members of his team to do this, go there, bring that, or help him do something he can't do for himself.

Ironside almost never appears depressed or regretful about his disability … although since he's kind of a grouchy sort anyway, it might be hard to tell if he was. I did see one episode where Ed is shot, and might be paralyzed, in which Ironside confides that, far from living well with his disability, "I die with it, every day." He said this in an effort to get Ed to agree to surgery that might end his paralysis, after Ed had indicated he would rather follow the Chief's example and accept his impairment. It made sense for the episode, but contradicted most of what the rest of the series shows. It felt like an anomaly, a false note in an otherwise very truthful show.

Ironside is a modern-day Sherlock Holmes, with three Watsons instead of one. Almost every episode features discussions or "skull sessions" where the Chief poses questions to his team, prodding them to think more sharply and probe beyond the obvious. The Chief is occasionally stumped, but never for long, and he often seems to be two steps ahead of everyone else. I got the sense that he likes it that way, too; he often keeps insights and theories to himself during investigations, maybe as an unconscious means of asserting control, or simply because he loves to savor a good logical puzzle and challenge his team to keep up with him.

In each episode I watched, there was at least one, but no more than two moments when someone would make an awkward reference to Ironside's disability. It's usually shown as a sort of social faux pas, or in the case of criminals, an instance of fatally underestimating the Chief's abilities.

For example, in one episode, the team identifies a place a half hour away where they hope to find a clue, if they can get there in time. A Sheriff's deputy says, "I can go now. I can get there faster", then pauses, looking at Chief Ironside as if he's said something insensitive." The Chief says, "That's okay, I'm not much good on a motorcycle. We'll meet you out there." He says this matter-of-factly. He's all business.

These moments are almost always incidental, and rarely crucial to the case. Disability on "Ironside" fulfills two functions. It underscores the idea that law enforcement is as much cerebral as it is physical. And, it is occasionally used to set up nail-biting physical risks for the Chief himself … situations where his team comes to the rescue. Even then, though, the Chief never backs down, physically. He intimidates just by slowly wheeling towards a crook with a gun. The bad guys get this look in their eyes, like they're thinking, "This is nuts! What am I supposed to do now?!" The Chief's unusual position and lack of apparent fear throw the suspect off guard just long enough for Ed, Mark, or Eve to show up and knock him down.

This show would be ground-breaking if it premiered today. I can't think of a TV show since that treats physical disability better than "Ironside". Disability is both central and incidental, and that is pretty realistic. For people with disabilities in real life, disability is both central and incidental … not necessarily an obsession, but something that comes up every day, even if only in small ways.

"Ironside" looks and sounds like a late 60's, early '70s show, and that can be distracting. The hairstyles, clothes, slang ("That's a lot of bread, man!"), and gender and racial aspects can be funny or at times genuinely appalling. I started watching one episode that was so full of racial stereotypes that I couldn't bring myself to watch it all the way through. The show's point of view seems to be that of a moderately progressive white guy who believes that some women are pretty capable and that certain black people are okay, but they have to prove it. Still, other than that one episode, I didn't find the period aspects too disruptive.

I would also remind younger readers that hourlong dramas in those days didn't include long story arcs or long-term character development. Each "Ironside" story is self-contained, and they rarely refer in any important way to events in previous episodes. Except for daytime soap operas, TV shows just didn't do that then.

My favorite "Ironside" moment so far? The Chief and Eve are riding in the back of the armored car, on the way to a crime scene. They're rocking back and forth uncomfortably, and Ironside says to Eve, "Police work … it's a hard dollar!" I feel like the same could be said of living with a disability. Maybe in a way they were saying that.

"Ironside" is an entertaining show. It has a subtle but meaningful message that people with disabilities can be effective when they have a good team with them, and use the strengths they do have to compensate for their impairments. It doesn't hit you over the head with big points, and it's definitely not sentimental. I like it a lot.

Watch "Ironside" at Hulu.com.
Posted by apulrang at 6:15 PM