I Can Stop Blogging Now, It's Been Done Perfectly

I just read this “Letters To Thrive” contribution by the Editor of Ramp Up, a disability website affiliated with the Australian Broadcasting Corporation. It was posted earlier this month, and has been reblogged many times, so I’m sure tons of people have already read it. But everyone needs to read the letter, so I am posting a link to it here. I want people with disabilities, young and old, male and female to read it. I want parents of kids with disabilities to read it. I want teachers and counselors and disability service providers to read it. And it couldn't hurt for everyone else in the world to read it, too.

A lot of it is about sex and relationships, but it’s about so much more than that, too. If aliens landed and destroyed all disability-related writings except this one, I think we’d still be in pretty good shape. I really almost feel like I can stop blogging now, because this says it all.
Posted by apulrang at 7:22 PM No comments:

(Halloween) Photos Of The Day 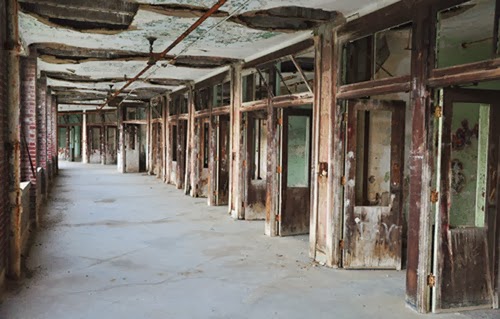 "6 of the Scariest Abandoned Mental Asylums in America"

From HowStuffWorks.com via the Independent and Visible Tumblr blog.

I'm posting this picture and link to more like it, not to trivialize the abuses of mental health care with the levity of Halloween, but to emphasize the true horror of institutionalization of the mentally and physically disabled.
Posted by apulrang at 4:57 PM No comments:

Is this college application season?

I was just thinking about when I was applying to colleges. If I’m right about the timing, it would have been the fall of 1984 that I spent sorting through the application packages of the 5 colleges I chose to apply to, and working on those application essays. I really wish I still had copies of those application essays, but I don’t. I do remember that somewhere in the essay portion of each application, I talked about my disability.

My recollection is that I described my disabilities with only a moderate amount of detail. I then made some kind of statement that even though I had disabilities, I emphatically didn’t want to pursue any kind of career or even interest in disabilities in general. Essentially, I made as passionate a case as I could for avoiding becoming part of any sort of disability community. At that time, in my head, it seemed like an honorable, even heroic stance. And for what it’s worth, I got 4 college acceptances, including my first choice, so I guess nobody saw my writing about this and said “Yuck!”. Nobody in my high school years ever introduced me to another way of thinking about disability. I didn’t know anyone else with a disability. The only images and ideas about disability I was exposed to were either intensely medical … which bored me, and pitiable ... which of course I wanted no part of.

It wasn’t until the Gallaudet University student protests for a Deaf President, which took place during my Junior year in college, that I first started to absorb the idea of disability as a social issue, something like race and gender. That’s also when I first saw or heard of disabled people being bad-ass as disabled people, not as people overcoming or masking their disability. So really, what started to turn me around wasn’t any particular person or role model, and it didn’t come from an intentional process of education or persuasion … it happened because an event happened that had nothing to do with me directly, but which I felt connected to in a way that surprised me.

I wonder if this is still a common progression for young people with disabilities? Or, are there more opportunities now for youth with disabilities to learn about disability from different perspectives, and have earlier “awakenings” to their disability identities?
Posted by apulrang at 3:56 PM No comments: