Photo Of The Day ... And A Disability Role Model 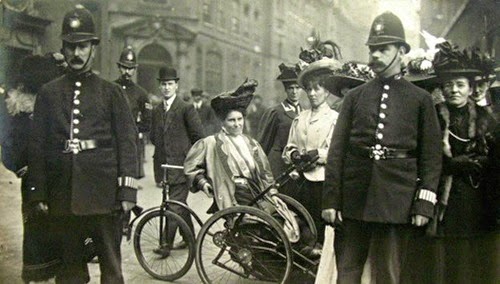 The Crippled Suffragette: Rosa May Billinghurst
Bisexualfandom - May 27, 2014

(Via the Just Rollin On Tumblr blog).

"Billinghurst’s ‘invalid tricycle’ gave her the mobility she needed to become an active member of the suffrage movement. Her ‘invalid tricycle’ was a makeshift wheelchair consisting of a modified tricycle with hand controls. Billinghurst attracted public attention by appearing in processions dressed in white and wheeling along with her machine decked out in colored WSPU ribbons and “Votes for Women” banners. Billinghurst rose to prominence as a recognizable public figure and became known as “the cripple suffragette.”"

Why oh why have I not heard of this woman before!
Posted by apulrang at 3:15 PM No comments: