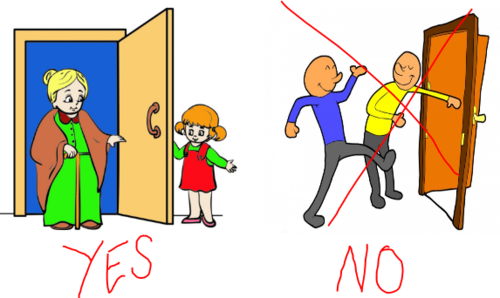 The first time I wrote anything about my disability for public consumption, I wrote about the difficulties I had with heavy, hard-to-open doors in my high school. It was supposed to be funny, and I guess it was, at least to other highschoolers, because classmates would still occasionally mention the article two or three years later. I can’t honestly remember whether the doors got any easier, or if peoples’ behavior changed for the better, but I think maybe a few people got a taste of what life with disabilities was like. I think they learned that what I found to be problematic was something they’d never thought of.
Posted by apulrang at 5:32 PM No comments:

Want to know more about Winter Paralympic sports? Click here for a fantastic visual guide to each one, assembled by Gimp Tips.
Posted by apulrang at 4:45 PM No comments:

I’m starting a new thing. Every Friday I will highlight three of my favorite disability-related websites. Occasionally, like today, I will add a bonus site that isn't about disabilities, but that might be useful to disabled people.

I first read columns by Mike Ervin in New Mobility Magazine, back in the early ‘90s, when I was a shiny new employee at a Center for Independent Living. I had always admired columnists, especially funny ones, and it meant a lot to me then to see a columnist with a disability who took disability as his main topic. I lost track of him after a few years, and then I read a blog post by Roger Ebert, in which he raved about this hilarious disability blogger calling himself “Smart Ass Cripple”. I visited the blog right away, and read several posts, one after the other. I laughed a lot, and also thought I noticed a familiar theme or two. What finally really tipped me off was his reference to his Alma Mater, the “Sam Houston Institute for Technology”, (SHIT), which is what he called the institutional care facility he lived in during his youth. After exploring the nooks and crannies of the blog, I finally discovered that yes, Smart Ass Cripple = Mike Ervin. Nice to see you again!

Smart Ass Cripple isn’t the only disability blogger with my kind of dark sense of humor. What makes him better than most is that most of his posts have not one, not two, but at least THREE layers of meaning. His stories are deceptively simple, his jokes sometimes corny. But soon you notice the meaning under the surface. Then, after maybe reading it again, or perhaps a half hour afterwards, you realize that he’s made a third, quite radical and often serious point. We all should be reading Smart Ass Cripple, and remember … think about it while you laugh, and let the deeper meanings sink in.

This is one of the very first Tumblr blogs I subscribed to, mainly on the strength of a series of ultra-short, Twitter-style statements about the perils and pitfalls of life in a wheelchair … “Wheelchair Problems”. These were presented with large, plain font lettering, centered in solid color boxes in a variety of primary colors. It was a very simple, very effective series and a great way to structure a disability blog. After awhile I started seeing fewer of these “Wheelchair Problems” boxes, and more diary-type blogging … still very short and sweet … about the blogger’s everyday life comings and goings. She started posting photos of herself, confirming that she is a fairly young woman who uses a manual wheelchair. I had guessed that, due to the tone and style of her writing. It’s not that her writing was poor or immature … far from it. It's just that she sounded like a smart, observant teenager, perceptive in some ways, but inexperienced in life. Soon, she started a lot about getting ready to leave home for college. Since then, most of her posts have been about this new adventure, told in little snippets of her daily life, with stories about her small victories and frustrations not just wheelchair-related, but of all kinds. She’s also got a great Twitter feed that you need to follow as well (@forrestgimpp).

I read Wheelchair Problems because for her casual, personal writing style, which says a whole hell of a lot while only rarely saying anything “important” in and of itself. I also read her because it reminds me of when I was first going to college, so her writing makes me feel a bit old and a bit young at the same time.


Think Inclusive is my newest favorite disability website. It isn’t an individual blog, but more like a news or magazine type website. It is run by a Tim Villegas, a Special Education teacher who is committed to “Inclusive” education. I have only sampled a small portion of the articles on this website, but it is crystal clear that it has a very progressive, student-centered, and disability-positive point of view. While there are certainly pros and cons to how divisive the disability world is becoming, especially concerning kids with disabilities and their education, the divisions are real and have meaning, and it is great to see a site geared towards other “professionals” that clearly takes sides … and the side I would choose. At the same time, there’s no “anti” flavor to the site. There are ideas and even groups the site’s contributors oppose, but what we read about most is what they believe in, and take the time to back up with real-life evidence and perceptive, compassionate writing.


I am interested in all sorts of disability issues, but I have a particular passion for how children and youth with disabilities fare in school and in their families. I feel like in “Think Inclusive” I have found a place where I can trust the motives, and learn more about a disability topic I care about.

Bonus: How To Adult

This is a fairly new YouTube series, with only 3 episodes so far, but I think it’s going to be a winner. The title is pretty much all you need to understand the premise. It is an informational series for young adults, soon-to-be adults, and anyone who missed out on any the stuff adults are supposed learn about. It is for people of any age, but from the tone and style, I’d say the main audience is supposed to be “young people”. In fact, if the presenters aren’t careful, they could overdo the slang, quick cutting, and pop culture references. I’m pretty far removed from youth culture myself, but several times I wondered if the presenters might even be a few years out of date in their style. Still, it’s a great idea, and I look forward to seeing more videos.

How To Adult isn’t about disability, but I think disabled people need this kind of thing more often than most. Many of us, particularly those of us who grew up with disabilities from childhood, overlooked these practical little skills while we struggled with “more important things”. We might have done wonders to graduate from high school or college, assemble a support network, and piece together resources to achieve independence, but then find that we don’t know how to wash our clothes properly, or how to introduce ourselves to a neighbor. How To Adult may offer us another painless way to learn the stuff we should already know.

More favorites next Friday!
Posted by apulrang at 1:50 PM No comments: