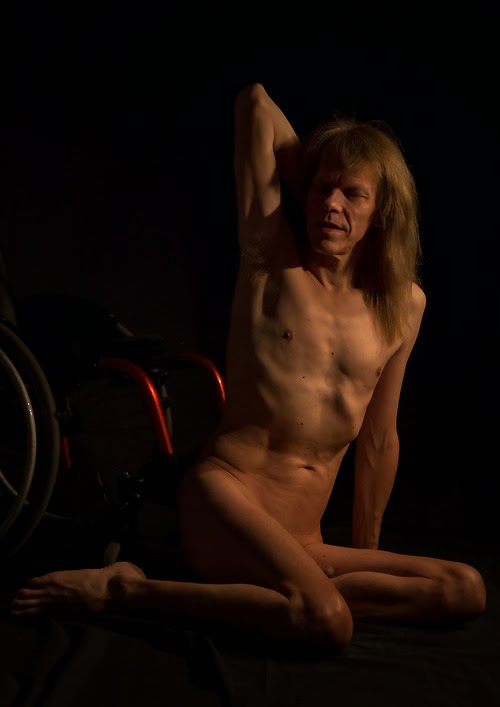 I was just thinking the other day that almost all the blogged photos on the theme of "disabled people are sexy" are of women. So, when I saw this one I figured I really had to post it.

From Photographer With Wheels Tumblr blog, via Disabled People Are Sexy.
Posted by apulrang at 5:19 PM No comments:

A few notes about these articles:

I suggest reading the Keller piece first, because it’s likely to make you angry or at least uncomfortable. The Holmes post may make you feel sad, but also kind of exhilarated, because she writes about a sad, upsetting thing in such a beautiful, resonant way. You’ll feel better at the end if you read the articles in this order.

Both articles are about social issues in which there are valid points on "both sides". There are, in fact, different approaches to life-threatening illness, and losing weight is, for many people, an important health goal. However, both of these priorities are almost always crusted over with unnecessary layers of social shaming and judgment, which means that really valuable, non-hurtful discussion on either of them is extremely rare.

The biggest problem with Keller’s Op-Ed isn’t so much anything he specifically says, it’s the tone throughout. If the contempt and disapproval oozing out of every sentence wasn’t intended, then he’s a terrible writer.

The brilliance of Holmes' piece I won't even try to explain.

Neither article is about disability, but both should speak loud and clear to disabled people regardless. Disabled people are constantly questioned about how we process and talk about our disabilities, both medically and socially. We are never more than a few steps away from the implication that the costs of keeping us alive and independent aren’t worth it, even to us (but really to everyone else). People say they just want to “have a conversation” about these “issues”, but what they really want to do is find a socially acceptable way of saying that the things we do and the way we do them are wrong.

We also frequently have to contend with supposedly well-meaning people who question the very nature of our disabilities, implying that there must be some unnamed “things” we could do to make ourselves better, or more functional, or more productive, if only we educated ourselves or tried harder or were less self-involved. We do it to each other, too. And of course, our "red handles" are either very, very visible and tempting, or, if not exactly visible, so large that people seem to run into them accidentally.

Addendum: A Tumblr blogger I admire reblogged this and pointed out that cancer might be considered a disability. I agree, especially since Keller treats this woman's cancer exactly the way ableist people treat other disabilities they "have opinions" about.
Posted by apulrang at 2:02 PM No comments: