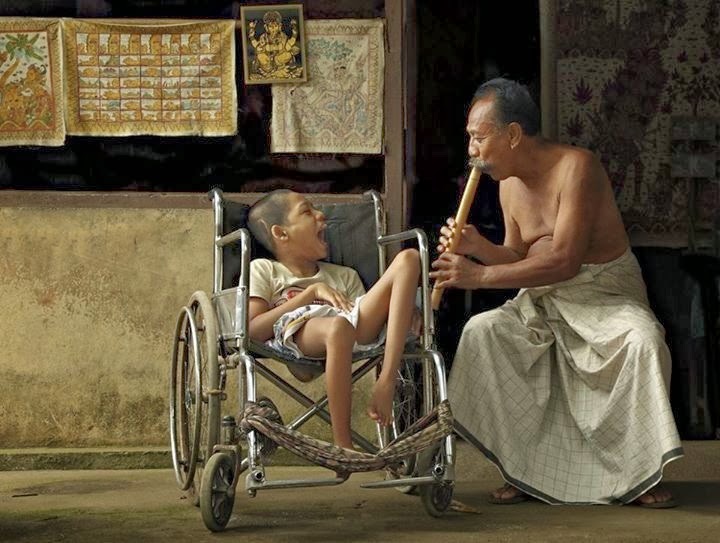 From the Disability Curious Tumblr blog. (Child & Flutist)
Posted by apulrang at 6:20 PM No comments:

This is a very good primer on the Autism Speaks controversy. I like the way it is structured around the kinds of questions people unfamiliar with the issue are likely to ask. This is the kind of issue outline that should be prepared for all sorts of disability issues that get mainstream media attention. It’s right to complain about journalists’ ignorance of disability issues, but it’s also probably up to us to educate them.

I honestly thought when I started reading this article that the disabled man was going to turn out to have been killed, maimed, or tortured. I’ll bet he was scared to death, and probably felt extra humiliated because he was targeted for his disability. But, I can’t help feeling that Bob Greene’s tone in the article just doesn’t match the actual severity of what happened. The man was robbed, but he wasn’t injured. I know that’s not saying much, but it’s not nothing. Maybe I’m just naturally contrary about these stories, but I see evidence of a story about a significantly disabled man who lives independently, has full mobility in society, and who is taking a rare but not unheard-of misfortune of city life … a mugging … in stride. Yes, he was targeted because of his disability, but there’s nothing in the article that suggests it was anything like a “hate crime”. I feel bad for the man, and I do think it’s pretty low to target a person in a wheelchair this way, but sorry, I don’t get the “revulsion”.
Posted by apulrang at 2:52 PM No comments:

Ableism In A Nutshell

I’m re-watching the early seasons of “Downton Abbey”, the ITV / PBS series that takes place in England in the ten or so years after 1912. In Season 2, a main character has a spinal cord injury from fighting in World War I. He’s being pushed around the big estate’s grounds in his wheelchair, by his on / off, will they / won’t they lover.

He, the disabled man, says, “I’m strong enough to push myself.” She, the non-disabled woman replies, “I’ll be the judge of that.”

It’s a tossed-off line, not the start of an argument, not even a mild one. It’s just something they say. But what a pure, distilled example of one of the main forms of ableism.
Posted by apulrang at 1:51 PM No comments: