"This chair is my white cane. Where's yours?"


Tonight’s #FilmDis discussion on Twitter (9 PM Eastern) will be about disability on television. That got me thinking about whether I have a favorite disability on TV scene. I think the Ironside scene above might be the one for me. It’s from Season 1, Episode 11, Light At The End Of The Journey. Chief Ironside works with a blind woman to identify and catch a murderer, while fending off her over-protective fiancé.


I could do without the syrupy musical score, but the scene itself is amazingly complex and sophisticated, especially for 1967. For one thing, it is a very rare example of peer-to-peer mentoring. Usually, TV and movies tell us that it takes a non-disabled person to snap a disabled person out of their self-pitying funks. Ironside is tough and confrontational here, but he’s got credibility from his own disability. It’s also remarkable for a mainstream TV cop show to draw such a smooth connection between the experiences of blindness and physical disability.

The bonus is how Ironside pinpoints the sexism involved, too. He even violates the man to man code and focuses on Norma, showing first disapproval, then open hostility towards her fiancé when he becomes aggressively controlling.

If you watch other episodes of the original Ironside, you’ll see that while Ironside’s disability is always there, never hidden, it rarely plays this big a role in the story. That also helps make this scene, and this episode, more powerful.

Twitter
Disability.TV Podcast
Posted by apulrang at 3:55 PM No comments:

Email ThisBlogThis!Share to TwitterShare to FacebookShare to Pinterest
Labels: TV 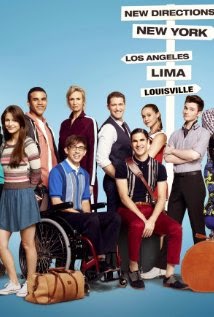 Glee ended last night, and I didn’t watch it. I haven’t watched Glee consistently since the end of Season One. I adored the Pilot episode, but like Vox.com’s Todd VanDerWerf, I found that my crush faded quickly after that first date.

Mostly, I loved the music, (glee club covers of pop hits and classics), but another thing that drew me to Glee was the inclusion of a main character who was a wheelchair user … Artie Abrams, played by the (non-disabled) actor Kevin McHale. When Glee started in 2009, just seeing a character with a disability on a TV show seemed like progress to me. Later on, I started to notice inaccuracies and troubling themes in Artie’s character. You could tell he wasn’t really a paraplegic. It’s not just that I knew it for a fact, I could see it and feel it, which isn’t good when you’re trying to make the audience feel that you are your character and not just an actor in a costume. Artie had his interesting moments, but tended to fall back on cliché, like the dream sequence when he got out of his wheelchair to dance.

Then there was Becky Jackson played by Lauren Potter, an actor who actually does have Down Syndrome. At first it was refreshing to see a disabled actor playing a disabled character, and a cognitively impaired character not presented as a sweet little angel. But, Glee took it too far too many times. Becky’s crudeness and weird “alliance” with the evil Sue Sylvester came to seem like a nasty gimmick instead of mold-breaking.

There’s more I could say. Cheryl Green and I did say more in our Disability.TV Podcast conversation about Glee. Click and listen. You will notice that our dislike of the disability portrayals on Glee is more intense exactly because we both sort of loved Glee. Or rather, we loved the start of Glee, and the idea of Glee. The show had a lot going for it, including a terrific setup to examine disability, along with other ways people can be socially marginalized, then empowered through friendship and teamwork. Instead, Glee went for cheap, easy laughs, leaned on clichés, and indulged in the same stigmas it supposedly fought.

Sometimes that works. Some shows manage to satirize and criticize prejudices while playing on them, but it takes care and control. Part of what made Glee exciting at first was it’s volatility. It seemed like it could veer out of control at any moment. Often it did. Maybe it’s a Ryan Murphy thing. American Horror Story has a similar problem. It’s wild enthusiasm tends to overwhelm any sense of control or care. Both series have great moments … even great disability moments … but they seem almost accidental. And in the next scene, old stigmas take center stage again, because, you know, why not?

I guess what Glee taught me about disability portrayals is that it’s not enough to just throw disabled characters into the mix and have them do a few surprising things. You have to pay attention to what you’re doing and how you’re doing it. You don’t have to be dull and “politically correct”, but you do have to give a damn, and focus.

Twitter
Disability.TV Podcast
Posted by apulrang at 2:29 PM No comments: