A Piece Of Our History

I ran across this at Ollibean.com earlier this week. I worked at a Center for Independent Living for over 20 years, so of course I knew who Ed Roberts was, but I can’t believe I had never read this speech.

For those might not be aware, Ed Roberts was as close to a “Father” as the Independent Living Movement has. He had pollo as a child, and for the rest of his life he used a wheelchair and needed equipment like an iron lung or respirator to breathe. He and some of his fellow disabled students started an activist-oriented, DIY disabled students organization at UC Berkely in the late ‘60s. That organization formed the basis and model for the hundreds of Centers for Independent Living all over the United States, serving people with disabilities of all ages and all degrees and kinds of disabilities.

The “504 Rallies” were a nation-wide wave of protests to put regulatory teeth into the first comprehensive disability rights law in the United States -- Section 504 of the Rehabilitation Act. The rallies are widely recognized as the true beginning of the Disability Rights Movement … mass protests and sit-ins at Federal offices organized and carried out by disabled people themselves, not their families or professional allies.

Ed Roberts gave the speech almost exactly 37 years ago, April 30, 1977, after sit-ins lasting 3 weeks resulted in full implementation of Section 504. Do read the whole thing at the link above. Here are a few of the parts that mean the most to me:


"We have to begin to think very clearly, that what we need to do is help raise the consciousness of our fellow Americans with disabilities, to help them come out from behind, from the back wards, from the institutions, from the places, the garbage heaps, of our society. We have to stop the warehousing, the segregation, of our brothers and sisters.”

"We have begun to ensure a future for ourselves, and a future for the millions of young people with disabilities, who I think will find a new world as they begin to grow up. Who may not have to suffer the kinds of discrimination that we have suffered in our own lives. But that if they do suffer it, they’ll be strong and they’ll fight back.”

“ … we, who are considered the weakest, the most helpless people in our society, are the strongest, and will not tolerate segregation, will not tolerate a society which sees us as less than whole people. But that we will together, with our friends, will reshape the image that this society has of us."

"We are no longer asking for charity. We are demanding our rights!”

"And we will march ahead together. And nothing will stop our achieving equal opportunity, and the right to move about freely in this society.”

"We will storm the schools and open them up. We will be sure that each person with a disability who has special needs has the money and the power to gain what they need to move them back into the mainstream of society. And we will assure a future for the millions of people who are not now disabled. You know, you come to think of it, that we are assuring a future for a lot of people we don’t know at all, and who don’t know that their future may be, very similar to ours.”

I don’t know whether to feel great or terrible that these words from 37 years ago are still bracing, even radical. They crackle with energy and purpose and specificity, in a way that vague feel-good generalities about “awareness” just don’t. Sadly, though we have made progress, a lot of the goals Ed talks about remain unfulfilled.

Sorry everyone. I’m just feeling old and nostalgic today!
Posted by apulrang at 5:30 PM No comments: 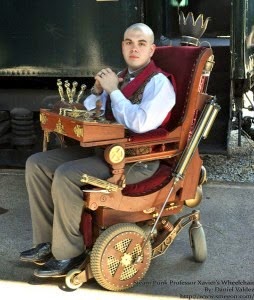 I finally listened to the first Criptiques Podcast, featuring an interview with one of my favorite disability bloggers, Emily Ladau. Emily and her podcast interviewer, Catlin Wood, say during their discussion that they are making each other nod their heads a lot, especially describing being visibly disabled in college and only gradually coming to feel connected with a disability community or "crip culture". I nodded so much I worried my head would fall off.

The podcast accompanies the recent publication of Criptiques, by Caitlin Wood, an anthology of essays on disability by people with disabilities. I look forward to the next episodes. And I ordered the book, too.
Posted by apulrang at 1:04 PM No comments: