Another Chance for the CRPD 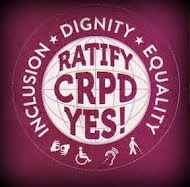 Ratification of the UN Convention on the Rights of Persons with Disabilities (CRPD) will be taken up for consideration again in the U. S. Senate this Tuesday, July 22, 2014. Now would be a good time for United States residents to contact their Senators and urge them to support ratification of the treaty. It has taken too long for the Senate to ratify this uncontroversial treaty, held up only by fringe, ideological fantasies and paranoia unrelated to disability issues themselves.

Call your Senators ... especially if they voted against ratification before.
Posted by apulrang at 5:47 PM No comments:

Where Are The Disability Shows?

Has anyone heard anything about new disability-themed, disabled charactered TV shows this year? Last year at this time, critics at the Television Critics Association press tour were giving us their first hopeful, though lukewarm takes on three high-profile disability shows:

- Ironside, a remake of the classic Raymond Burr series of the 60s and 70s, with the new show anchored by Blair Underwood as Robert Ironside, an NYC policeman returned to duty as a special investigator after being paralyzed by a gunshot wound.

- Growing Up Fisher, a sit-com about a blind dad, to be played by the excellent character actor J. K. Simmons.

All three shows, at that early stage, contained the ingredients of success and possibly even significance. Ironside was a "reimagining" of an old series that viewers of a certain age remembered fondly. Michael J. Fox is a bona-fide movie and TV star, universally loved, and a well-known spokesperson for Parkinson's awareness. J. K. Simmons is less well-known outside of movie-geek circles, but came with strong comedic chops and face recognition ... he's a "that guy" you instantly recognize though you may not have ever known his name.

All three shows failed, both in ratings and, I think, ambition. Each show had it’s own problems, but I think one mistake they all made is that they relied too much on disability to carry the show. Actually "The Michael J. Fox Show" wisely let the main character’s disability to fade into the background, but then the rest of the stories and characters turned out to be too weak and conventional to make hold viewer interest. “Ironside" was basically a generic police procedural with disability tacked on. "Growing Up Fisher" seemed to be trying for a quirky, heightened tone that would sidestep realism, but did it halfheartedly, so it was weird, but not weird enough, and kind of insulting. J. K. Simmons is a great comedic actor, but he seemed limited by the need to keep doing obvious jokes about his blindness.

Meanwhile, I haven’t heard anything about any new shows with prominent disabled characters or themes. Has the industry soured on disability shows? Or, have writers, producers, and show-runners figured out that the best depictions of disability on TV have arrived unannounced?

For example, “Game Of Thrones”, which isn’t about disability at all, has three main characters with disabilities that affect their personalities and decisions significantly, but are well integrated into the larger plot of the show. “Parenthood” deals with Asberger Syndrome more directly, but only occasionally because Max is just one of an ensemble of characters in the Braverman family. Then there are the one-off and occasional appearances that make an impact … like the police chief’s daughter on “Sleepy Hollow” and the “scared straight” wheelchair banger girl on “Orange Is The New Black”.

I still think there’s room for a high-quality TV show focused on disability themes. However, I don’t think anyone should be trying too hard to make it happen. I would rather wait for the right story idea, and the right people to write and produce it. Until then, I think we do pretty well with the less heralded disabled characters, incorporated into shows we like already.
Posted by apulrang at 1:02 PM No comments: