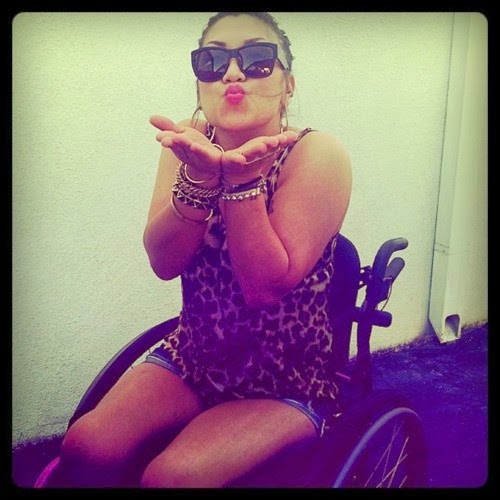 From the Take Me As I Am Tumblr blog, via The Lame Dame.
Posted by apulrang at 5:05 PM No comments:

I haven’t posted much on this blog about assistive technology, probably because I don’t use much myself. I am, however, an enthusiastic user of Apple products, and I’ve been somewhat aware of Apple’s incorporation of accessibility features into its operating systems in the last 10 or so years. There are two people I used to work with, both legally blind, who bought iPads and became total converts, but I don’t remember having heard much from other disabled people on their actual experience using the latest “smart phone” and “tablet” devices.

The apps and features look fantastic. What is the real-life verdict?
Posted by apulrang at 1:27 PM No comments:

The UK Supreme Court has come out with a powerful decision affirming disabled peoples’ right to "liberty", regardless of their care needs. It is a decision that sounds similar to the United States Supreme Court’s Olmstead decision, but the language here is clearer and more easily understood by the average person, while Olmstead is strong, but constantly needs to be explained.

According to The Guardian, "In a test case on the conditions under which three individuals are living, the supreme court said that their medical conditions did not entitle the state to deny them their human rights."

The Deputy President of the UK Court said:

"If it would be a deprivation of my liberty to be obliged to live in a particular place, subject to constant monitoring and control, only allowed out with close supervision, and unable to move away without permission even if such an opportunity became available, then it must also be a deprivation of the liberty of a disabled person."

"The fact that my living arrangements are comfortable, and indeed make my life as enjoyable as it could possibly be, should make no difference. A gilded cage is still a cage.”

The UK court says that instead of competing with the duty of care, ensuring greatest possible liberty is part of the duty of care. A person's need for care neither requires or justifies reduced liberty.

If you are a quadriplegic and need help with most of your daily routines, things might come to a point where care providers decide that the safest, most efficient way to make sure your needs are met is for you to be in a nursing home. Even if that’s not what you want, there are ways that you can be forced into this “choice”. Your care provider might refuse to provide care in your home, saying they don’t feel you are safe in your own place. Funders might decide that they would rather pay a nursing home fee than for home care visits. And if you have any kind of cognitive impairment, there will certainly be at least some “experts” who will believe that you should be more supervised. In all of these cases, the assumption is that you can either be free, or safe and cared for, never both.

This UK decision poses the radical but common sense notion that having freedom and choice is part of being cared for. Being able to live in your own place if you want iis as important as good nutrition, being able to go to the bathroom, and being free of physical abuse or neglect.

Unlike Olmstead, which didn’t spell out any particular actions to implement the principles it affirmed, this decision will apparently require each individual's care situation to be reviewed annually, specifically to determine whether the disabled person is being ensured an appropriate amount of personal choice and liberty.

I have to admit that I love that the pronouncement was made by the “Baroness Hale of Richmond”. It probably doesn’t impress most British people, but to me it sounds so much cooler and more weighty coming from “Lady Hale”.
Posted by apulrang at 12:31 PM No comments: