Each of the victims received a $7.5 million judgement from the jury, which only too eight hours to make their decision.

Two things I found interesting in this article:

1. The defense claimed that the City of Atalissa, which owned the building and leased it to the company, was responsible for its terrible conditions. I think there's something to that, but that maybe a separate judgment should be made against the City for allowing the situation to continue. It doesn't absolve the company's responsibility. In fact, lots of people are responsible, to some degree, for blissful ignorance, if nothing else. It seems like an example of out of sight, out of mind, plus an assumption that anyone who says they are "taking care of" people with disabilities must be doing God's work.

2. It sounds like the owner of the company, at the very least, had an extremely old-fashioned view of what he was doing, and probably had himself convinced that he was being good to these guys. Again, we see this idea that all you need is good intentions. You don't need to learn anything, you don't need to ever question what you're doing or how you're doing it, and you don't have to submit to outside verification from anyone if you are providing for these poor unfortunates. Doing good may be many things, but it's rarely simple, and good intentions are rarely enough.

On the other hand, maybe he was just greedy, full stop.

The following video accompanies the story:

Posted by apulrang at 6:58 PM No comments: 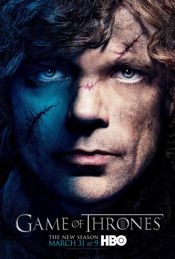 Tyrion Lannister is a badass ... my favorite character with a disability in current popular culture.

"Game Of Thrones" is the HBO television adaptation of a series of fantasy novels by George R. R. Martin, known collectively as "The Song Of Ice And Fire". It depicts a complex and violent struggle between the great houses of Westeros for the kingdom's Iron Throne, against the backdrop of a slow but gathering threat from the mysterious "Wildlings" of the north.

Essentially, this is a world with the look and feel of medieval Europe, with elements of "Lord Of The Rings" and its many imitators. There are knights in armor, swords, and perhaps some sorcery. There is also a great deal of greed, duplicity, and sex, which tend to overwhelm and overshadow the rather thin veneer of chivalry that normally dominates most fantasy tales. It is more "modern" than most similar stories, in that the nobler elements of the fictional world are more forthrightly shown to be an illusion to cover up the darker side of human nature.

Tyrion Lannister is a "little person", sometimes referred to in the novels and TV show as "The Imp" or "Half-Man". He is one of two sons of Tywin Lannister, head of the Lannister family, one of the contending great houses of Westeros, known mainly for its great wealth and ruthlessness. He is also one of an unusually large cast of major characters, so, what, other than his short stature, makes Tyrion Lannister stand out? For me, it is because the character provides such acute insight into the disability experience.

- On the surface, people treat Tyrion with some respect, and it seems like he's more accepted and integrated into his society that we might expect. Yet, there's a thinness and falsity to most of the bows and "M'Lords" people give him, a limit to how far his acceptance can go. This is especially true with Tyrion's father, Tywin, who might on occasion give Tyrion important duties, but just as often will remind him that in his father's eyes, he's not a real member of the family. Tyrion has a position of prominence, both inherited and earned, but he knows that there's something unreal and conditional about it.

- Tyrion's main attributes are his sense of humor, in contrast to everyone else's deadly seriousness, his sexual appetites, his love of drink, and, increasingly, his knowledge and knack for strategy. The interesting thing about his sexual exploits is that in the context of this fantasy world, he's not depicted as a pervert or predator, as people with disabilities sometimes are in fiction, but as a more or less straightforwardly hard-partying dude. People joke about it, but no differently than they would any other randy young man in Westeros. There's a kind of equality here, but when he actually starts to fall in love, we see Tyrion again slow to accept that love and real attachment can happen for him.

- We don't get to see Tyrion and his brother, Jaimie Lannister … "The Kingslayer" … together very much, but when we do it's striking how equal their relationship is. Unlike their sister, Cersei, who disparages Tyrion at every opportunity, Jaimie and Tyrion genuinely seem like buddies, if that's even possible in this world in which even siblings regularly stab each other in the back … both literally and figuratively. You get the feeling that they might plot against one another, but when push comes to shove, they'd probably step up and die for one another if necessary. This is one of a handful of Tyrion's relationships that so far seem to be genuine, and genuinely equal.

- Tyrion has developed two other "friends" so far who further flesh out how he deals with his disability. One is Bronn, a mercenary or "Sell-Sword" who, on a whim, agrees to champion him in a sword duel, and from then becomes, essentially, his paid servant and bodyguard. The two aren't quite friends, but it feels like they are just a bit more than employer and employee, which I think mirrors the relationship some people with disabilities have for personal care aides.

- The other important person in Tyrion's life is Shae, a prostitute he hires, first for a night, but then keeps on indefinitely as something somewhat more than just a sexual partner. Both Bronn and Shae seem to develop true loyalty and affection for Tyrion, and stick by him on several occasions when ordinary servants and retainers would bolt. Tyrion's reaction to this loyalty is great to watch, as it only slowly dawns on him that it's possible people might befriend him because they truly like and respect him, not just for pay.

-Tyrion often takes a special interest in others he meets who are also physically disadvantaged, such as Bran, the young son of the Stark house of Winterfell, who early in the series is paralyzed and unable to walk. Tyrion is also one of the few characters in the whole story who seem able to like and respect people ... or not ... regardless of their family, clan, or status.

- The character is played by Peter Dinklage, who is, himself, a little person. He won an Emmy and a Golden Globe award for this role, and he's such a good actor that it's hard to tell how much of his own feelings about disability he brings into his work in "Game Of Thrones".

These are all things that gradually emerge in the character over the course of the series, but even if you miss some of them while following the dozens of other interlocking plots, you can get a lot of wisdom about disability just from Tyron's own words. Here are a few of my favorite Tyrion Lannister quotes … 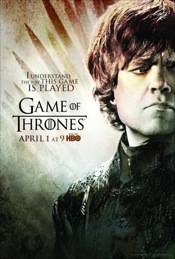 Jon Snow: Why do you read so much?

Tyrion Lannister: Look at me and tell me what you see.

Jon: Is this a trick?

Tyrion: What you see is a dwarf. If I had been born a peasant, they might have left me out in the woods to die. Alas, I was born a Lannister of Casterly Rock. Things are expected of me. My father was the Hand of the King for 20 years.

Jon: Until your brother killed that King.

Tyrion: Yes, until my brother killed him. Life is full of these little ironies. My sister married the new King, and my repulsive nephew will be king after him. I must do my part for the honor of my house, wouldn't you agree? But how? Well, my brother has a sword, and I have my mind. And a mind needs books like a sword needs a whetstone. That's why I read so much, Jon Snow.

Jaime Lannister: Well, even if the boy lives, he'll be a cripple, grotesque. Give me a good, clean death any day.

Tyrion: Speaking for the grotesques, I'll have to disagree. Death is so final. Whereas life, ah life is so full of possibilities.

Tyrion: Let me give you some advice bastard. Never forget what you are. The rest of the world will not. Wear it like armor, and it can never be used to hurt you.

Maester Luwin (referring to Bran Stark, after Tyrion has given him the design for an adapted saddle): The boy has lost the use of his legs.

Tyrion: What of it. With the right horse and saddle, even a cripple can ride.

Bran: I'm not a cripple.

Tyrion: Then I'm not a dwarf. My father will be rejoiced to hear it.

Tyrion: I have a tender spot in my heart for cripples and bastards and broken things.

Tyrion: If you're going to be a cripple, it's better to be a rich cripple.

Here are some of Tyrion's best scenes in the first two seasons of "Game Of Thrones":

Posted by apulrang at 1:24 PM No comments: