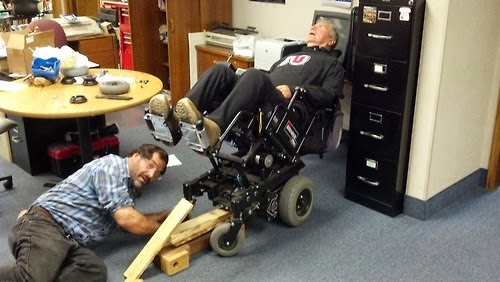 "And here we have our Board President, Mark Christiansen, taking a nice nap while his wheelchair is repaired by AD Kim Meichle."

From the Independent and Visible Tumblr blog.
Posted by apulrang at 6:27 PM No comments:

When They Make Things Worse 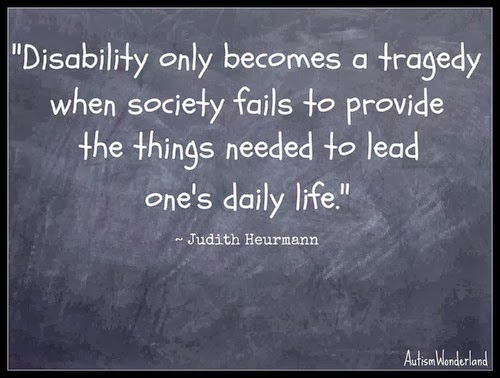 
One of the disability bloggers I follow, "Crazy Crip Girl", has been going through a long, slow-motion disaster at her workplace. The gist of it seems to be that the supermarket where she works did a big remodel, which included making all the checkout counters higher than they used to be. I don't know whether they are still within ADA specs, but they are too high for this wheelchair user to work as a cashier, meaning she's been bounced around from one position to another. At first, management assured her that the renovations wouldn't mess up the accessibility of her work area, and obviously that's exactly what happened. Then they said they'd put in some kind of ramp / platform so she'd be raised up to compensate for higher counters. They said it, but didn't get around if for weeks … for months? Finally, after yet another soul-crushing meeting, they finally had maintenance put in that ramp, which took them just a day to accomplish. Then, she comes back after a weekend to find they've taken the ramp out; they said it was a safety hazard.

This seems like a textbook case of personal advocacy and systems advocacy going together. Raising the height of the checkout counters may have cost a wheelchair user a job. I'm sure it's also caused inconvenience for wheelchair using shoppers, and shoppers who are very short, like me. I wish they'd commit to a proper, individualized "reasonable accommodation" for "Crazy Crip Girl". But it would be even better if they were forced to redo all their recently remodeled counters, to make them lower again.

They can't say nobody warned them.

To get the story from "Crazy Crip Girl" herself,

That should get you caught up on the latest developments, and some of the great comments and ideas others have sent.
Posted by apulrang at 5:37 PM No comments: