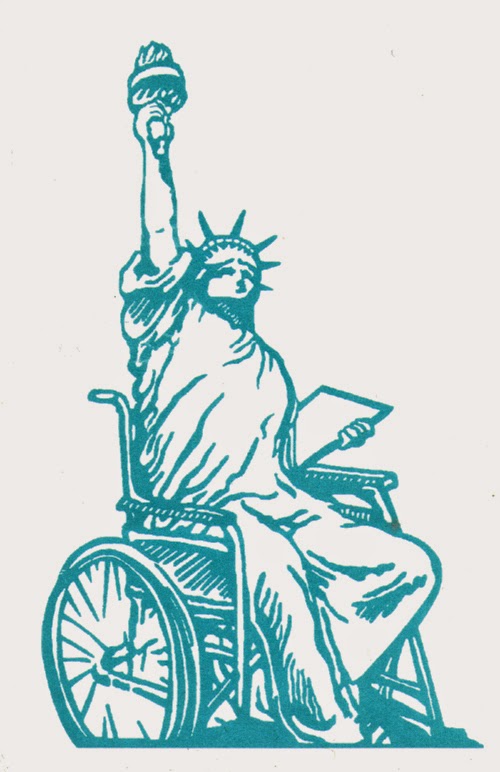 I don’t know who created this image in the first place, but it’s been kicking around for quite awhile, in various magazines, newsletters, and disability-related websites. It is one of the first disability rights images I remember seeing.
Posted by apulrang at 4:06 PM No comments:

Email ThisBlogThis!Share to TwitterShare to FacebookShare to Pinterest
Labels: Awesomeness

I’ve already found another item to add to the Independence Checklist, inspired by a blog post by Smart Ass Cripple:

Do you get to decide who sees you naked?
Posted by apulrang at 2:43 PM No comments:

Many years ago, I attended a disability conference where a speaker described a sort of checklist people with disabilities can use to figure out whether they are truly “independent”. The idea was that there are many disability service and support models that include certain “freedoms” and “choices” that feel like independence, but which can easily mask a fundamentally dependent situation. The speaker asserted that his checklist were indicators of genuine independence, not just superficial “privileges”. I can’t remember who the speaker was, or recall every item on his list.

The checklist that follows is my attempt to re-create and expand on the idea. Are you “living independently"?

- Do you have a lock for the door to the place you live, where only you or someone you choose have the key? Do people have to knock and ask permission to visit you?

- Are you responsible for your own finances, regardless of where the money comes from?

- Do you own your eating utensils, towels and washcloths, bedsheets and pillowcases?

- Do your helpers mostly work around your schedule, or are your routines mostly determined by your helpers’ schedules?

- If you did several things people disapproved of, would you risk losing services you need?

- Would you be permitted to eat Oreo cookies for dinner, if you wanted to? (I call this The Seinfeld Condition … after one of comedian Jerry Seinfeld’s famous bits).

- Would you be able to make a spur-of-the-moment trip to a local convenience store, if you got a sudden, intense, 3 AM craving for Beef Jerky?

- If you and another consenting adult wanted to have sex or get married, could you do so?

- Do you have more or less the same rights and responsibilities as non-disabled people your age?

- If some of your rights and responsibilities are controlled by other people, is that by your choice?

Notice that none of these items are about where you live, whether you have money and from where, whether or not you need or have everyday self-care help from others, or how physically or mentally capable you are. A quadriplegic can live independently. So, to some extent, can someone with significant intellectual disability. And, someone with fairly mild disabilities can just as easily live very dependently, their lives largely controlled and regulated by others.

What other items would you include on your “Independent Living Checklist”?
Posted by apulrang at 12:49 PM No comments: