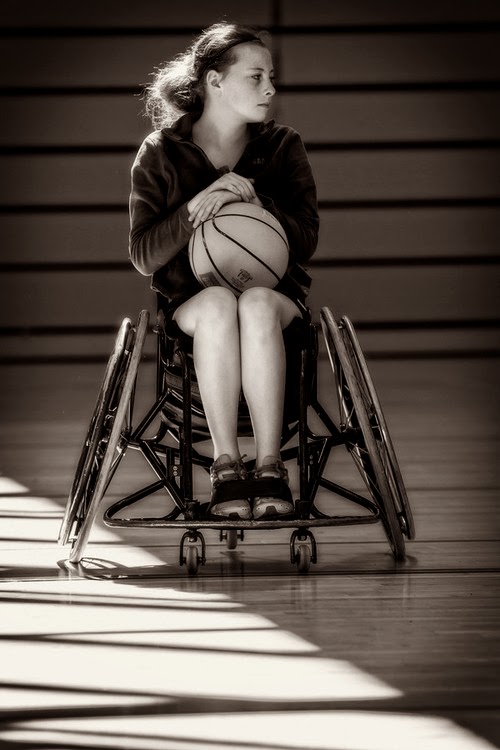 From the Sports & Copines Tumblr blog, via disABILITYaware.
Posted by apulrang at 4:14 PM No comments:

"My Gimpy Life" Is Coming Back!

This is one of the fastest disability rights victories I can remember. President Obama announced the Minimum Wage hike for federal contract workers in the State of the Union Address on January 28. In the live Tweeting event I took part in, the question of sub-Minimum 14(c) workers came up almost immediately. I think the Autistic Self Advocacy Association might have been the first agency to ask the Administration about it, and when it looked like the answer was “no”, they may have been the first to start the advocacy ball rolling, just a few days after the Address. 2 weeks later, the White House reversed their position.

A whole bunch of people with disabilities who work hard under federal contracts will now go from being paid below the current Minimum Wage to being paid a full and higher Minimum Wage of $10.10 per hour. That is one hell of a victory.

So, do we think that the Administration literally didn’t think about this aspect before we brought it to their attention? I’ll bet that’s exactly what happened. I picture President Obama getting a little testy with his staff about it. I mean, here's potentially the most popular item in his State of the Union Address, and it turns out they failed to do their homework on it and within minutes discover this nasty little exception that could make the whole think look totally unfair. Amateur hour!

I'd just say that maybe it isn't so terrible. I mean, disability issues are always forgotten and overlooked in broader policy discussions. It's not like this team is any worse than any other on the subject.

Either way, thank you President Obama for doing the right thing. And we do hope you'll help us end the sub-Minimum Wage entirely, for all workers with disabilities.

Here is a more in-depth piece about what’s been achieved. It includes a very good, and quite even-handed explanation of the background issues. Not even the “mainstream” news outlets gave the “other side” of the argument, but BillMoyers,com did, even though it is a more left-wing, pro-worker sort of website. Personally, I think including the other side’s strongest argument makes our side’s argument that much stronger than articles that just act like there is no counter-argument.