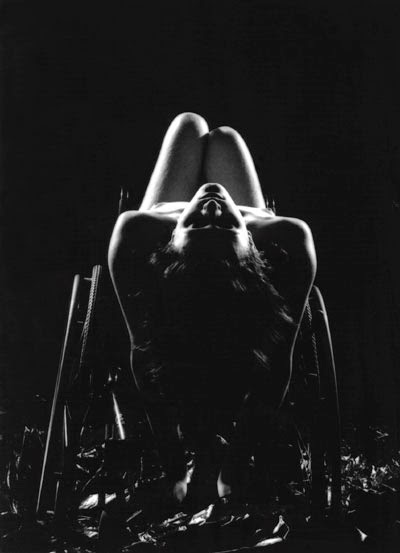 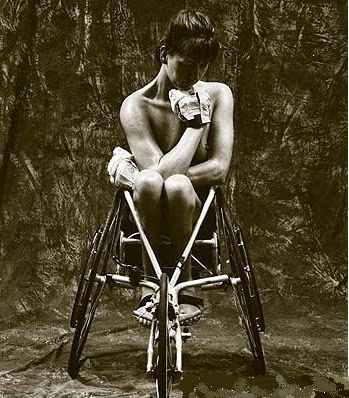 These are just two from a collection of photos by German photographer Rasso Bruckert, posted today at the Onoffman: Abled-Bodies Tumblr blog.
Posted by apulrang at 6:02 PM No comments:

How Could We Have Thought It Was Okay?

The other day, I was reading an interview with the creators of one of my favorite TV shows, "The Americans" … which has nothing at all to do with disability … and this passage in the interview jumped out at me:

“ … it turned out that her parents had this huge secret: They’d had a child that they prepared to receive in the home, and it turned out the child was severely disabled. At that time, what you did was put the child in a home and told the kids and everybody that the child had died, so that’s what they did.”

The person saying this was talking about a real-life family that included a famous psychologist who lived during the 20th century. The child was his and his wife’s. The TV writer cited the example to illustrate how seemingly normal, stable families can harbor really massive secrets that profoundly affect everyone in the family, even if the secret is never discussed or formally revealed.

What struck me most, though, was the sentence:

"At that time, what you did was put the child in a home and told the kids and everybody that the child had died, so that’s what they did.”

I won't go into the long history of institutionalization in the United States, except to say that in some ways it is not a very long story and fairly recent as these things go. Suffice it to say that as the quote above indicates, there were several decades in the 20th Century when it was considered progressive and humane, if not precisely desirable, for families to place children as young as infants in large institutions that were a strange mix of hospital, residential school, and prison. It was a practice widely endorsed and recommended by doctors and accepted or embraced, (I don't want to speculate too much on which) by families. Many, if not most of these children would live out their entire lives in these institutions. Others would be fortunate enough to leave and go on to carve out real lives for themselves. For further reading, I recommend Mike Earvin's blog, Smart Ass Cripple, in which he often refers to his time in an institution, which he calls the Sam Houston Institute of Technology, (S.H.I.T.).

A few big institutions still exist … some of them in the exact same buildings purpose-built in the early 20th century. Small "group homes" thrive ... the large institutions' direct descendants, which are either a vast improvement, or an unfortunate half-measure, depending on your point of view. Yet, we have clearly passed the era where regimented, medicalized, institutional “care” was considered “the best thing”.

Still, it seems to me that we as a society haven’t fully grappled with the moral implications of this period when it was considered a difficult, but enlightened thing to do to place your newborn infant in what amounted to a massive hospital, more or less for life, and to some degree or other write the child out of your family’s life. We sort of know that it was a horrible thing to do, but we tend to excuse it by implying that people didn’t know better back then.

It reminds me of how we sometimes explain slavery … incorrectly I believe. We think of it as some kind of temporary mass psychosis that was a terrible shame, but what you gonna do? We are a more just society now, humanity progresses, people are smarter, etc. But really, were people all that different only 150 years ago? Were people that much more ignorant of disabilities 50 years ago? Or was there a more deliberate ideology at work?

So here are the questions I'm thinking about:

Did most people in the "institutionalization" era sincerely believe it was the best, most humane way to treat children ... later adults ... with significant disabilities? Or, was there always a buried understanding that it was wrong somehow?

Did medical and educational professionals truly believe that institutions could provide better care and upbringing than families?

Were medical and educational professionals at the time genuinely uninformed about certain kinds of disabilities. For example, did they sincerely believe that intellectually disabled people were in some way "less than human" ... deserving of humane care, but not human rights?

Did families really the marketing put on by these institutions, that they were highly competent, humane facilities providing top-notch care? Or, did many or most families kind of know on some level, before Willowbrook, that institutions were pretty terrible?

If the expense of care at home was a factor, why is only recently that people are starting to suggest that the same money spent on brick-and-mortar institutions should simply be given instead directly to families?

If people either lied to themselves en masse, or severely misunderstood the nature of disability, then what sins of self-delusion or ignorance might we be committing right now against people with disabilities? What will our grandchildren and great-grandchildren look back on in our practices, and wonder how we could have been so cruel or stupid?

Are there thought processes and precautions we can use now to prevent ourselves from making fundamental mistakes in this area that we would be ashamed of later?

Please comment below. I would like to know your thoughts on this. It seems like a really big deal to me that is rarely discussed. Let's discuss.

I debated whether to mention this, but what the hell ...

The other thing that got me thinking about the institutionalization era was reading the current Atlantic Monthly cover story, "The Case For Reparations: An Intellectual Autopsy", by Ta-Nehisi Coates. Coates reviews the history of slavery in America, and argues that it wasn't an isolated practice, but rather was succeeded after its abolition by other policies and practices deliberately designed to promote white supremacy, and that the effect of these policies can be measured today in the economic lag still experienced by African-Americans. This article, and piece on it by Matthew Yglesias at Vox.com on how the economics of "reparations" might work prompted me to wonder if disabled people as a group have ever suffered a legally-sanctioned, systemic robbery on a scale that might, theoretically, call for some sort of systemic reparations. And I hit on institutionalization. I don't know where to go with that, but it's something to think about.
Posted by apulrang at 5:26 PM No comments: