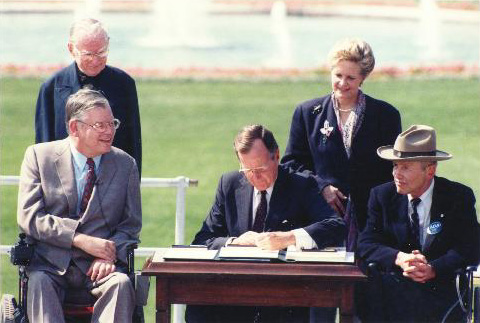 I've got some thoughts on the Americans with Disabilities Act. I was less than a year into the disability rights / independent living field when the ADA passed, and I was a participant in the first round of advocate training on the ADA, which took place over a week in Washington DC. The training was presented, if I remember correctly, by the Disability Rights Education and Defense Fund ... which, among other things, has one of the coolest names in disability rights.

So, I feel like I get to enjoy a bit of old guy status as someone who was there from the beginning.

First, the half empty part of the glass …

Ironically, all of the assurances we advocates used to give to businesses that the ADA wouldn't result in a rash of lawsuits … that sweet old grandma and grandpa's general store wouldn't be forced to close because of an inaccessible restroom … turned out to be all too true. The ADA really has turned out to be mostly toothless, particularly in regard to small downtown stores, restaurants, and professional offices where people with disabilities hoped to see much more accessibility. In retrospect, despite their dire predictions of legalistic doom, the business community had nothing to worry about.

The ADA did not bring people with disabilities into the job market in droves. This may partly be another aspect of the ADA's weakness, but I think it's mainly because there are so many reasons for low employment of people with disabilities other than outright discrimination. In fact, it turns out to be amazingly hard to distinguish between illegal discrimination on the basis of disability, and simple selectivity by employers. Disability discrimination is still there, but its roots turn out to be more complex and harder to pull out cleanly than I think any of us thought. It hasn't helped that the 23 years since the ADA passed have also seen the erosion of employment security for everyone.

The ADA has not lived up to the rhetoric we used to promote it. The law hasn't really revolutionized the lives of Americans with disabilities. Millions of us still live cruelly and unnecessarily restricted lives, and many of us still experience discrimination … often well-meaning and unintentional, but at times as mean and vicious as the worst imaginable gradeschool playground. Obviously, we knew the ADA wouldn't change human nature overnight, but I think most of us had higher hopes.

Still, the glass really is half full ...

The ADA changed how we define and think about disability. Before the ADA, most people thought of "the disabled" as people in wheelchairs, plus maybe blind and deaf people. That tendency persists, but I've noticed that the post-ADA generation are much more comfortable thinking of disability inclusively, as a large group of people with a wide variety of impairments, including cognitive impairments, mental illness, learning disabilities, and chronic pain. The names of specific diseases and conditions still have their place, but they aren't the dividing lines they used to be. Disability is far more commonly measured now in practical terms, rather than by diagnosis.

The basic tenants of disability rights have mostly been absorbed by most Americans, even if they aren't always put into practice. To cite just one very minor example, I heard two podcasters giving a recap and commentary on "Downton Abbey" say that the character Mr. Bates … a manor house valet with a significant limp from a war injury … was an example of the importance today of the Americans with Disabilities Act, because his job was explicitly threatened by people who felt that he might not be able to do the job, and in any case would bring shame on the house simply because he was disabled. That the ADA was correctly invoked by people with no personal or professional expertise on disability, in a discussion of a TV show, suggests an impressive degree of penetration into popular culture.

Although we rightly complain about it every day, transportation is vastly more accessible and available to people with disabilities than it was 23 years ago. It is astounding to me that every one of the public transit buses operated by my rural county is wheelchair accessible, and have been for at lest 15 years. It's still a patchwork system with some fatal flaws … but it is a system that people with disabilities use every day, with demand outstripping capacity. That, in itself is good news, an indicator that people with disabilities have higher expectations of mobility. When the ADA first passed and my county planners first put together their Paratransit system, they were genuinely worried that there wouldn't be enough qualified passengers to make the system work.

The ADA quite unexpectedly started a revolution in long term care, by making unwilling placement in nursing homes and other institutions a matter of civil rights, not medical necessity. If you need personal care every day and you want it in your own home, not a nursing home, the ADA is on your side. More significantly, pretty much every professional in the long term care field is at least aware of the idea that leaving people no choice but institutionalization is no longer accessible. I don't think they all believe it yet, but few of them are completely ignorant of the concept. Most of the legal and policy frameworks are now in place to make ADAPT's goal to "Free Our People" a reality. All that's missing now is the political will, and creative problem-solving skills.

My prediction for the ADA's future?

I think that the ADA could become a valuable safeguard for people with disabilities as the Affordable Care Act changes health care … in both intentional and unintentional ways. There may come a day when the ADA's mandate for equality and reasonable accommodation will protect us from necessary but risky efforts to lower the cost of health care.

Other than that, I don't see much sign that the ADA will suddenly bring tougher enforcement of accessibility standards, or do much to improve employment rates. That's okay though, because even though it hasn't worked the way we thought it would in 1990, it has worked.
Posted by apulrang at 5:29 PM No comments: