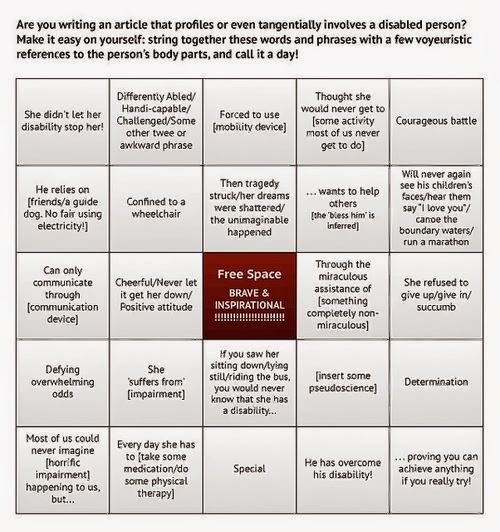 "How Not To Write About Disabled Folks."
From the Ramblings Tumblr blog, via via too brain fogged for this.
Posted by apulrang at 4:36 PM No comments:

I had fun last night joining the Live Tweeting party, (or whatever you call it), among people with disabilities during the State of the Union Address. It worked pretty smoothly. Everyone showed up to this particular site that uses Twitter, and when signed up, every Tweet you issued automatically included the hashtag “#SOTU4PWD”. That way, all of the Tweets for that topic would be visible together. You’d send out Tweets with observations connected to the speech, in real time, and also read what others were Tweeting, in real time. You could also Retweet things other people said if you really liked it or they said it better than you could. The result was a lineup of scores, maybe hundreds of comments about the State of the Union Address, from a disability perspective.

I didn’t stay after the speech was over, so I missed what was probably some pretty intense Tweeting about the "Republican Response” speeches. Apparently, the main Republican Response was given by a Congresswoman who has a child with Down Syndrome, and she talked about that a bit in her remarks. I don’t know what she said, but in skimming some later Tweets and some blog post comments, I got the idea that some folks were glad she highlighted independent living and community integration concepts, while others resented her “use” of her child to make partisan political points. Others, also, pointed out that her views and goals on disability were at odds with her conservative political philosophy. I’m sure there’s lots to chew over about all this, and I’m half disappointed, half relieved that I didn’t try to wade in. 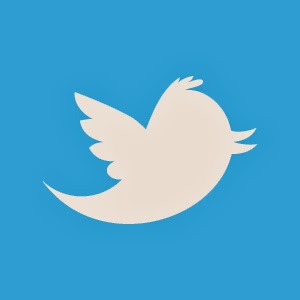 So, what about the speech? Not bad. Not spectacular. Certainly not one of President Obama’s best. From a disability perspective, on the surface, it was a bust. Unless you count the moving story of wounded Army Ranger Sgt. Cory Remsburg, there was no mention of people with disabilities at all. The focus with Sgt. Remsburg was all about his recovery and sacrifice, not about his disability or any policy implications that might flow from that. Which is fine. He was there for a different rhetorical purpose that was valid in itself. It was a bit strange that “disability” wasn’t even included in the usual list of social groupings seeking equality … such as gender, race, and sexual orientation.

- Small Business? How about helping people with disabilities start their own businesses? What about tying Federal small business loans to accessibility compliance?

- Raise the Minimum Wage? Great! And while we’re at it, how about ending the practice of paying sheltered workshop workers less than Minimum Wage, whatever it happens to be?

- Saving for Retirement, Expanding the Earned Income Tax Credit? Why not allow disabled people to save and invest without losing support benefits?

- VP Biden’s To Review All Job Training Programs? Does that include Vocational Rehabilitation? (I hope so!)

- Foreign Policy? Ratify the UN Covention on the Rights of Persons with Disabilities!

There is one topic that I think really should make it into the upper tier of State of the Union Address issues, and that is Long Term Care, for people with disabilities including the elderly. I think everyone knows in some way that for the next couple of decades or so, it’s going to take more and more people, and more and more money from somewhere to provide decent care and support for the aging population. A lot of us who have disabilities have been refining and perfecting this for years already. We’ve identified quite a few things that work really well … like being able to hire your own personal care aides for help in your home … and a number of models that we really don’t like … such as nursing homes and group homes. So, there’s no shortage of ideas and warning flags available. Also, it would seem to be a natural idea to pair the Long Term Care need with the pressing issue of Long Term Unemployment. One of these days, a President is going to have to bring this up and start getting people used to talking about it intelligently. It would have been great this year, but I wasn’t expecting it.

The whole experience underscored, I think, that while there are certainly distinct and important “Disability Policies” in need of creativity and debate, a lot of our most important issue are embedded in so-called “mainstream” issues. If so, then it’s up to us to bring them up, rather than waiting with our arms folded hoping that politicians will finally, one day, remember to mention them.

Plus, I’d rather have a meaty speech with hidden, but very real potential connections to disability concerns, than have a superficial speech sprinkled with pro-forma mentions of disabled people and what non-disabled people think we probably care about.


P.S.: Lead On Update has a really nice summary of the #SOTU4PWDS Live Tweeting event, including lists of actual Tweets. One of them is mine! Conveys the flavor and tone of the conversation.
Posted by apulrang at 2:17 PM No comments: