Are There Any Good "Disability Songs"?

Large percentages of popular songs are about being a woman or being African-American. There are also some sub-genres of folk music from specific ethnicities that are nevertheless widely popular, like Celtic or Latin music. There are entire sectors of the music industry devoted to what it's like to be Southern and / or rural, and working-class in America, i.e., Country Music ... or young, i.e. 98% of all popular music.

Yet, I can't think of a single song, much less a genre or sub-genre of popular music that clearly expresses or represents disability.

Yes, there are people with disabilities and others who write songs for a niche audience of disability activists, but that's not what I'm asking about. Folk or protest songs about disability may be incredibly rich, eloquent, and beautiful, but if they are mainly shared at conferences and marches, then their social significance and impact are limited. They don't have the reach of other genres that do speak of distinct groups, but to a broad audience. And I'm not even really looking for a genre. One song would do.

Can you think of one bona-fide, disability themed, popular song?
Posted by apulrang at 12:39 PM No comments:

The term struck a chord with me. I immediately thought, "Wow, finally a name for it!"

Its something most people with disabilities are familiar with, even if we don't have a name for it. Most of us also instinctively dislike it. Some are deeply offended. Some are annoyed. Some are just mildly disgusted. Our reaction varies, but I think we all know it when we see it ... well-intentioned propaganda meant to help us, that actually turns our stomachs. I'll have more to say about this as I read more, think more, and unpack the concept.

Let me say a few things to start off.

When I read this in my friend's Facebook post, I had already been thinking for awhile about some of the "inspirational" pictures and posters I see every day on Facebook, especially a rather strange sub-genre featuring extremely sick young children. They are so prevalent and so similar in their arrangement, captioning, and attached comments that they really seem to be some kind of enthusiasm or obsession. Frankly, I find it creepy.

If you had to sum up the totality of the disability experience, for yourself and the disability community as a whole, in one word, what word would you choose?

I've been thinking about this a lot as I try to figure out what the point of view of this blog will be. Too often in the disability world we try to answer questions like this strategically. We might think about it a bit too hard and then pick a word that conveys a particular message we think we should convey, or a word that elicits some emotion we want other people to have about us and our situations. 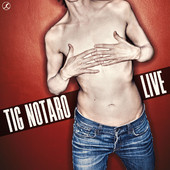 There is a line, and a few variations on the line, that crops up throughout comedian Tig Notaro's "Tig Notaro: Live" recording:

"Guys, relax. every thing's fine. I have cancer."

She says this several times, after people in the audience have apparently expressed some form of shock, sadness, or pity for her topic of the evening … her recent cancer diagnosis. Notaro's tone of voice is, itself, compassionate, sympathetic, almost pitying towards her audience. She really wants them not to feel bad for her. Empathize, maybe, but not feel sad about it.

Disability is different from illness in fundamental ways, but I think this line is a good way to sum up the positive, optimistic side of disability. If only to get past the furrowed brow and awkward questions, we want to tell the non-disabled people we meet:

Because in a sense, everything is fine. Usually. Most days. More days than not. For all intents and purposes, for me, as a person. Everything's fine. Things don't always go fine, and there are lots of things in the world that aren't fine. But I'm fine.

I do highly recommend everyone buy and listen to the whole performance:

As disabled comedians must know, it's hard to make disability or illness funny and relatable. It's hard even for people who have lived all their lives or for a long time with their disabilities. Tig Notaro did it perfectly the first time, and based on the details of her story, it was a completely new experience for her.
Posted by apulrang at 3:43 PM No comments:

People With Disabilities and Guns

As a person with physical disabilities, I am more physically vulnerable than most people, yet it's never seriously occurred to me to own a gun. Do people with disabilities own guns at a higher rate than the general population? If not, are we being foolish?

I think whether people with disabilities should be allowed to own a gun should be judged on a case-by-case basis, based on the same standards as anyone else, whether that "bar" is high or low. For myself, even if I was inclined to get a gun for protection, knowing my own physical boundaries, I don't think I could "safely" use a gun. I might be more likely to need one, but I'd also be more likely to miss my shot, or have it taken from me by an attacker.
Posted by apulrang at 5:52 PM No comments:

Pistorius' Side Of The Story

I am tempted to believe Pistorius' story. It makes a horrifying sort of sense. Of course, we haven't heard the full prosecution case yet, and they have already said that the police had been to the house before on "domestic" calls ... not proof, but a possible indicator of a different explanation.

Still, if Pistorius did accidentally shoot Ms. Steenkamp, then by his own description, it was something far worse than an accident. I'm of the opinion that guns are terrible self-defense tools for the home, so I'm biased here. But if Pistorius' story is true, then it's a strong argument that guns in the home are more of a risk than a protection. Apart even from that, taking multiple shots at a closed bathroom door indicates either extreme stupidity, or extreme paranoia of the kind that would call for some kind of counseling, even without an "incident".

Note also that Pistorius mentions when he did and did not have his prosthetic legs on. He doesn't explicitly say that he was more afraid of the supposed intruder because of his disability, but he does kind of relate his need to defend himself and Steenkamp to the fact that he wasn't wearing his legs. I wonder if we'll hear more from Pistorius or his defenders about ways his disability might relate to all of this.

The Onion's Tips For Not Accidentally Murdering Your Girlfriend.
Posted by apulrang at 5:02 PM No comments:

John Hodgman (a.k.a. Judge John Hodgman) posted this photo and caption on Twitter and Tumbr: 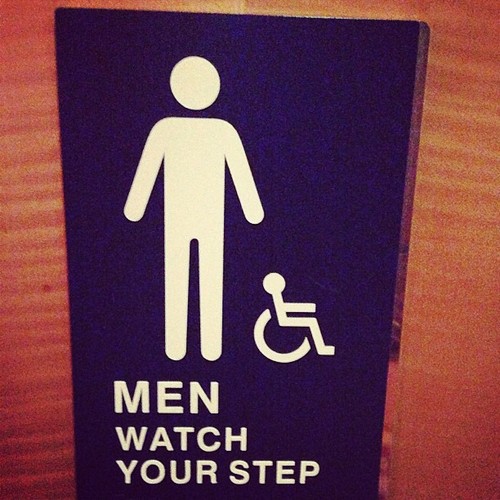 "This is pretty good advice even if you are NOT on a cruise ship, surrounded by miniature wheelchair people. (at Royal Caribbean Freedom Of The Seas)"

Several layers of funny there.
Posted by apulrang at 3:54 PM No comments:

How many of us who have disabilities actually feel any personal stake in celebrities who also have disabilities? Do you care about Oscar Pistorius in any kind of special way ... positive or negative ... because of his disability? Are you more interested in famous people when they have disabilities, or is your interest level determined by other factors, on a case by case basis?
Posted by apulrang at 5:41 PM No comments:

Is the developing Oscar Pistorius murder trial story in any way a "disability" story?

Yes, because the reason we even know his name ... and probably the only reason we know about Reeva Steenkamp's murder ... is because of Pistorius' 2012 Olympic performances. And the main reason we knew about those was because he was the first Olympic track athlete who ran on artificial legs.

No, because as far as we can tell or plausibly imagine, Ms. Steenkamp's murder, whether by Mr. Pistorius or not, had nothing to do with Pistorius' disability.

Or, maybe his disability was one of several elements that lead to what appears to have been a horrible crime. We often make the mistake of thinking that a person's disability either has nothing to do, or everything to do with their character or actions. This is especially true when the person either achieves something great ... like competing in the Olympics ... or does something dreadful ... like killing a room full of schoolchildren, or their girlfriend.

For those of us who have disabilities, its a seesaw. We want to claim "our" heroes, though we sometimes kind of resent them because their spectacular successes challenge us in ways we can never realistically meet. When disability becomes connected with tragedy or evil, we naturally, often rightfully, point out the ways that disability is unrelated.

But a disability is almost always two things at once ... a defining characteristic, and just a thing. It can't explain everything about us, but it has an impact on each one of us, whether we know it, like it, or not.

In the meantime, here's a thoughtful piece about what Oscar Pistorius meant, and now means for South Africa:

A Time.com article summarizes the case against Pistorius. It doesn't look good.

This is a test of my new disability-themed blog. I plan to post on a more or less daily basis, with thoughts and questions about disability ... broadly defined and from all angles.

Many posts will include links to related articles, blogs, and websites, for instance, the always excellent Smart Ass Cripple.
Posted by apulrang at 3:48 PM No comments: