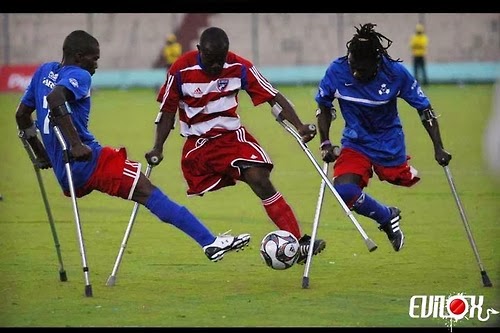 From the The Perks Of Being Disabled Tumblr blog.
Posted by apulrang at 3:32 PM No comments:

What Will We Tell The Children?

When I first saw this blog post, I immediately put it into my “to read” queue, because I’m fascinated by the question of when and how to explain to kids with disabilities about their disabilities.

I think it is one of the most important questions about raising kids with disabilities. In all honesty, it is a very emotional question to me, too. One of the few aspects of disability that has really upset me is when I have met children or youth with disabilities who did not seem to know much about their disabilities. Aside from not being able to explain them to others, I have felt like that lack of knowledge and understanding greatly undermines their self esteem and sense of mastery. So, I feel upset for them, and angry that for whatever reason they have been kept in the dark. Digging even deeper, I think that for me it’s all about the awful fear that people are thinking and talking about you completely differently than how they interact with you personally … sometimes known as being “two-faced”. To the child, it’s “Yay! You’re so awesome honey! Great job!”, while among people “in the know”, it’s “I’m terrified that she’ll never have a job, never live on her own, will always be like this.”

This is a nightmare scenario to me. Like all nightmares, it’s a distorted fear, exaggerated. But also like nightmares, it’s based on reality. For one thing, whether or not parents decide to discuss their child’s disability honestly with them, it won’t be a secret for long. “The world” will inform them, and not gently or thoughtfully. No matter how we process disability as adults, disability isn’t great news. How do you prefer to get bad news, from a random stranger, or worse, a work colleague you dislike, or from someone you love and who loves you? And just to up the stakes even higher, random strangers and semi-hostile acquaintances often don't tell you whatever the bad news is … they just look at you weird and talk about you behind your back.

Obviously, then, I have a bias in favor of disclosure and honesty about disability with disabled kids, and realistically, it’s the parents’ responsibility. Nobody’s going to do it for you, nor should they.

That said, I am not a parent, and I don’t really know much about the subtleties of how to be honest and informative, at different ages, regarding different kinds and degrees of disability. So that pretty much ends this conversation for me, because I feel like I’ve been presumptuous enough towards parents about this question … all but shaming them into taking a step they may not agree with or that they are justifiably afraid of. It is complex, as the blog post above ably demonstrates.

What I will do is say a bit about how the topic of my disability came into my life. To start with, I cannot remember any single moment when I wasn’t aware on some level that I was “different”. I never was told flat out that I had a disability mainly because I don’t think I needed to. Maybe that’s because physical impairments are easier to identify, and more insistent in their interference with everyday life. Mine were, anyway. I’ll make a guess that the first conversation I took part in about my disability probably involved me, my father, and an Orthopedic Surgeon explaining why I needed an operation, or didn’t need one. I do remember a few other, more weighty and disturbing conversations with my father and mother … one or two after graduating from high school, and a couple after graduating from college. These weren’t about my disabilities per se, but variations on what is probably the usual “What are you going to do with your life / Isn’t it time you grew up?” conversations all parents have eventually with their kids. Only I do remember that my disabilities represented lengthy chapters in those discussions. The issue wasn’t whether I knew I had disabilities, it was whether I really had a clue what that actually meant beyond physical inconveniences and unusual health concerns.

No, I don’t feel like anything was hidden from me. I never actually experienced any shocking revelations that shook meto the core. However, in retrospect I miss some conversations about my disability that never happened, and I wish that some that did happen had happened earlier.

At least that’s what I think now. Who knows, maybe my parents really did do the best that they could, and things actually went as well as they could have. As they say, hindsight is 20/20.
Posted by apulrang at 3:23 PM No comments: