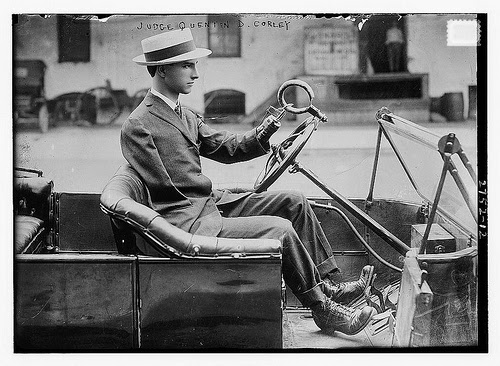 From the Cripple Club Tumblr blog.
Posted by apulrang at 4:17 PM No comments:

Here we go with another disability-related prom story, with some similarities and key differences from the story I commented on yesterday. I guess prom and disability is a potentially rich vein for melodrama, uplift, and regret.

I never attended the prom. I slightly regret it now, mostly because I know part of the reason I didn’t was that I just assumed the whole scene wasn’t “for me”, because of my disabilities. However, thinking back to the way I looked at things then, I can’t imagine actually putting myself through the traditional Prom routine. I can definitely picture going if attending solo to hang out with friends had been a socially recognized option, but as far as I knew at the time, it wasn’t. I certainly can’t picture going the tux, limo, corsage route, unless maybe me and a girl had decided to do it as a semi-goof. The whole traditional “formal” dating scene was something that I was excluded / excluded myself from, partly because of my disability and piss-poor body image, but absolutely partly because I didn’t buy into that scene anyway. If I’m honest with myself, it’s hard to pinpoint where one part of my attitude ended and the other began.

This is a good example of why it's ridiculous to talk about our disabilities and our “true” selves being separate, or whether we would jump at a cure if one was available. I can’t really separate my viewpoint on high school social life from my identity as a disabled person. My disabilities didn't fully determine my outlook, but they heavily influenced it.

Would I have gladly become a high school jock or Prom King candidate if I hadn’t had disabilities? Did I turn out nerdy, intellectual, and bookish because those are all mental pursuits, where physical strength and stamina don’t matter? I have no idea. I might as well wonder what I'd be like if I had grown up in Soviet Russia, or had been born in 15th Century Venice. In that sense, my disabilities and I are inseparable.

Someone could write an interesting Disability Studies thesis on students with disabilities and the traditional American high school prom. I wonder if anyone has done a comprehensive study of different high schools’ policies and practices around proms and other dances, and whether any of them consciously try to be more inclusive of students with disabilities. I would also love to see a survey of “human interest” news stories about disabled kids attending the prom.

If you have any disability-related Prom experiences or thoughts, please share them!
Posted by apulrang at 3:53 PM No comments: