I just watched this week’s episode of “Parenthood”. Wow. There are so many great disability-related ideas that have been teed up and are just waiting for follow-through.

Part of me wants them to just get on with it. Have Hank and Max compare notes on what it’s like to cope with other people when you have Asperger Syndrome. Get Max to patch things up with with his friend Micha, and in the process realize that preconceptions about his abilities as a wheelchair user are just as “stupid” as peoples’ attitudes towards his own Asperger’s. I'd like to see a little more of Micha's new basketball friends, who aren't very nice to Max, but seem to have no problem hanging with a wheelchair user. Max’s parents, Adam and Krisina, seem finally to be getting it through their heads that a more relaxed, hands-off approach is sometimes best with Max. Yet, they still seem addicted to the drastic intervention. I loved the moment when Kristina immediately interpreted Max's latest social problem as being her fault, and Adam, with gentle sarcasm, says, "It might be your fault." Because, you know, it's always all about Kristina! To be fair, in the past, it's always been about Adam, too.

I’m worried that they leave these great ideas just hanging  But, maybe I just need to be patient. Maybe these developments will be better in the end if they are allowed to happen slowly, naturally. I can’t think of another show featuring disabled characters where there is actual suspense about how aspects of their disabilities will play out, for themselves and the people around them. It’s impressive.

I'm watching the episode a second time, and I just had to share this little exchange between Max and his father Adam:


Adam asks Max if he can remember why Micha might have gotten angry with him.

Max: "Maybe it's because he was suddenly obsessed with basketball, and I told him basketball is stupid."

Max: "He can't even play basketball. He's in a wheelchair."

Adam: "Alright. I think that might have hurt Micha's feelings."

I loved this, except for one thing. If Max's Asperger's brain is so orderly and logical ... even though he's often working with faulty assumptions ... why doesn't Adam take the opportunity to argue with him a bit on his own turf, and draw a connection between Micha's disability and Max's? Or, is that unrealistic?
Posted by apulrang at 6:59 PM No comments: 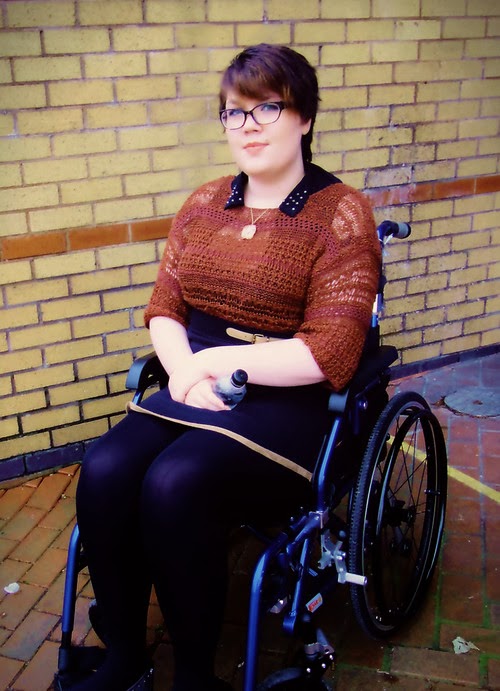 From the Why Am I So F***ing Tired? Tumblr blog.

She’s got a regular website, too, and videoblogs on her Youtube Channel … mostly makeup tips, but also some stuff about disability.
Posted by apulrang at 3:27 PM No comments:

Another Development About Ethan Saylor

It sounds like the Governor-appointed commission to study how police in Maryland interact with people who have intellectual disabilities is on the right track. The commission was set up in response to the death of Ethan Saylor, a man with Down syndrome who died in an encounter with police, in a movie theater, that escalated unnecessarily. The commission seems to have mapped out a more ambitious mission for itself, which will extend beyond just better police training.

I still would like to know more about the role of Mr. Saylor’s aide in the incident. A few reports earlier on suggested that she tried to tell the police how to deal with Saylor, but was ignored. If that’s the case, then I hope part of the police training includes listening to the individuals with disabilities and people who are with them. I also hope that anguish over this terrible incident doesn’t lead to the kind of caution and protectiveness that would end up unintentionally reducing freedom and integration. Hopefully, enough people with disabilities will attend the “listening sessions” to ensure that the outcomes are real progress, not just narrowly-defined safety.
Posted by apulrang at 2:47 PM No comments: