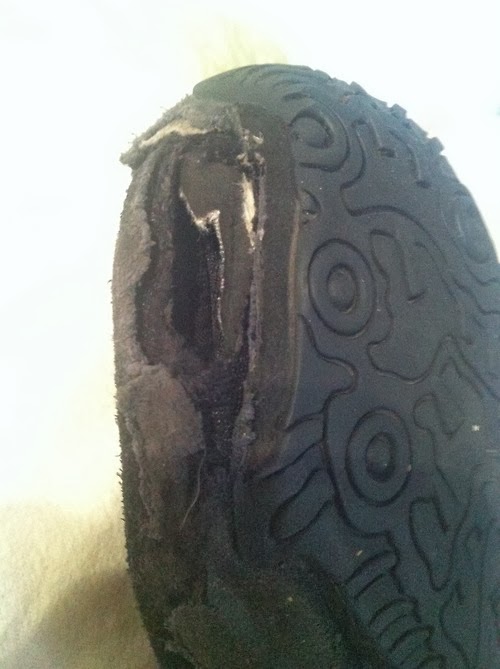 From the CP Shoes Tumblr blog.

This is a fascinating blog with a great premise … the little-known problem of early shoe death due to the strange ways of walking that often come with physical disabilities.
Posted by apulrang at 5:10 PM No comments:

How an Israeli with Cerebral Palsy Beat the Odds and Became an IDF Officer
IsraelSeen.com - December 7, 2013

I don’t know how the heck I found this article, but it got me really excited.

When I was a Junior in High School, we all took a standardized test used by the military to identify aptitudes for different military occupations. It was kind of fun, and I thought nothing of it. A few months later, I started getting brochures in the mail from different branches of the military. Then, one evening, our dinner was interrupted by a call from a Navy recruiter who wanted to tell me how awesome the submarine service was. He actually never spoke to me, but my father toyed with him for awhile, before asking him how they would accommodate my disabilities. At the time, I thought the whole thing was kind of funny, and I have never had any desire to serve in the military, even as a childhood fantasy.

Still, I occasionally think about this incident, and how truly strange it is that I couldn't serve in the military, even though there are plenty of things I could have done that have nothing to do with physical fitness ... useful things not requiring living in a submarine, riding in a tank, flying a fighter jet, or going on a foot patrol. Which is why this Israeli man's successful self-advocacy excited me. His physical disabilities are if anything more significant than mine, but he's doing his part. Obviously, he's motivated by beliefs I have a hard time relating to, but that’s beside the point. He wanted to serve, and seems to have known, on some level, that there had to be a way he could do so. His advocacy was personal and persistent, and successful.

When will something like this happen her in the USA? When will a highly motivated disabled young person offer him or herself to the military long enough and sincerely enough to break through to a real service role?
Posted by apulrang at 2:20 PM No comments: