It Can Be This Bad

One of the people I "follow" on Tumblr just reblogged this story, and I reblogged it myself. Now I'm including it here because it needs to be everywhere. For clarity, I'm going to actually quote the whole thing below, then add my comments. Original post by Feminist Rocker, reblogged by Andrea Shettle's Tumblr.

(One of my best friends on campus has cerebral palsy, and is confined to a wheelchair. Between the CP and a strong accent, she sometimes has trouble making herself clearly understood to strangers. She is having a strong allergic skin reaction to something; her aid has gone for the night, so I go with her to the hospital. The nurse is crouched down in the waiting room beside my friend’s chair.)

(Instead of responding to my friend, the nurse looks at me.)

Me:   “I would assume. She can speak for herself. I’m only here as a friend.”

Nurse. “And for how long have you had these symptoms?”

My Friend:   “I noticed them this morning, but they’ve gotten very bad.”

(Again, the nurse looks at me instead of my friend; I say nothing. She continues doing this for several moments, asking questions and then looking at me, until my friend finally snaps.)

My Friend:   “You talk to me, not her! She’s my friend; she doesn’t know anything about my medical stuff.”

(The nurse stands up and storms away. I follow, more than a little angry on my friend’s behalf.)

Nurse:   *to me* “You may think it’s nice to let her pretend to be a real person, but some of us are trying to run a hospital.”

(I am struck completely silent in rage and shock. A doctor, who I haven’t seen until he SLAMS paperwork down on the desk, interjects.)

(The three of them go back into an office where the nurse comes out in tears; she was suspended for her behavior.)

Stories like this need to be circulated. They need to be read by people who claim that ableism isn't such a big deal, that it's "annoying but benevolent", that it's "harmless". People need to read these stories, including people with disabilities who have been lucky enough in life to experience only minor insults and bureaucratic hiccups. People like me, most of my life.

Shit like this happens. People like this do exist. I still believe that people this poisonous about disabled people are few and far between, but they make up for their low numbers by doing massive damage wherever they go.

And to me, the most galling thing is that people like this nurse probably do believe they are being brave and bold to stick up for their twisted concept of reality. That nurse may have been crying when she left, but I bet by bedtime she was telling herself she was another martyr of "political correctness" or somesuch. Sensitivity training can't help someone like this.
Posted by apulrang at 9:24 PM No comments: 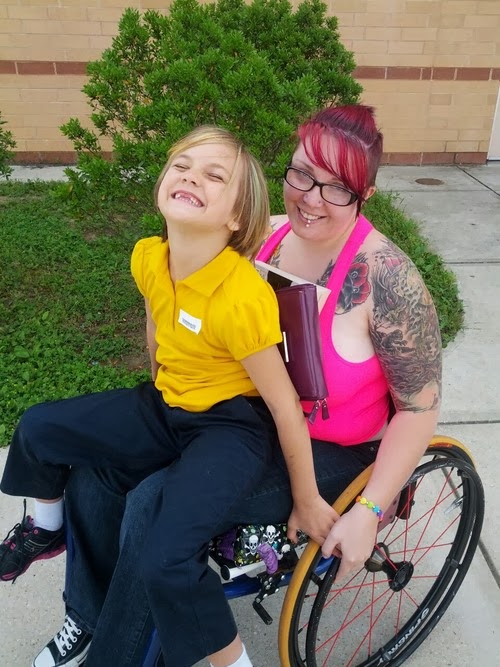 From the bunnika's blog Tumblr.
Posted by apulrang at 6:22 PM No comments:

I'm not completely sure what I expect to find out, but I'm going to try an experiment.

I will copy and paste into a text document, the full text of every news story my Google News page gives me on the keywords "disability" and "disabled". I'll do this every day for two weeks. At the end of the two weeks, I'll paste the entire accumulated text into Wordle.net, which produces color and size-scaled word clouds. Basically this should produce a graphical representation of what words come up most frequently in disability-related news stories.

After reading about and discussing as fact what we assume to be language habits and cliches about disability, I want to see what words actually come up most.
Posted by apulrang at 3:23 PM No comments: