Here is some … perplexing? … news to update the apparently goodish news about how New York State is investigating and prosecuting abuse in institutions for people with developmental disabilities. It seems that New York State’s new abuse investigation agency is being … or appearing … cagey about reporting data on the cases that have been reported and especially on the progress and outcome of cases. Officials are citing confidentiality for ongoing cases, but my sense is that nobody is really looking for results on individual cases, by name, but rather statistical reports on what is being done with reports of abuse.

Oddly enough, having worked adjacent to similar types of state agencies, I wouldn’t be surprised to find out that the apparent stonewalling is largely a matter of miscommunication about what, exactly, outside advocates want to know. Perhaps families involved are asking for information on specific cases … information that is too soon to report. Maybe that is being conflated with other advocates who just want to know not only how many calls and tips have come in, but how many of them have been deemed unfounded, how many are under investigation, how many are being prosecuted, how many care providers are on suspension, how many have been fired, etc.

The other thing I wonder about is whether the new agency got a flood of transparently false, malicious accusations. Maybe not. But, the same kinds of employees who could happily stage “fight clubs” with developmentally disabled group home residents might also feel comfortable reporting innocent coworkers they just don’t like, or took the promotions they wanted, to the anonymous tip line. Like I said, maybe it’s just my nasty, misanthropic mind, but I do hope the agency has some effective ways to quickly identify entirely false claims.

Either way, whether the agency is hiding something or not, they should figure out a better way of regularly reporting data on their work.
Posted by apulrang at 4:05 PM No comments:

"i’d like to take a moment to thank all the disabled people who make it through to the next day, no matter how difficult that may be.”
Thalensis - February 10, 2014

This is amazing. It should become a permanent, shared thing in the disability community, like the original Spoon Theory article.
Posted by apulrang at 3:34 PM No comments:

Looking Forward To A "Call The Midwife" Story 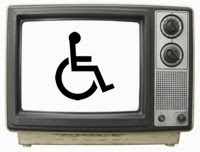 Call the Midwife's most controversial storyline yet as disabled boy and girl fall in love and have a baby
Emma Pryer, The Daily Mirror - February 9, 2014

I can’t wait to have the chance to see this!

At the moment, I think the only way for Americans to see Call The Midwife is on Netflix, and they only have two seasons available. The show is a BBC drama about Midwives in a poor and working-class section of London in the early 1950s. The tone of the show is surprisingly light, while at the same time focusing a lot of on the hardships of poorer Londoners dealing not only with post-WWII deprivation, but values and taboos that still hold sway and are just barely beginning to modernize. Each pregnancy the Midwives deal with on the show helps explore a particular theme … like out-of-wedlock pregnancy, interracial relationships and racism, lack of birth control, and … in one episode I think in the second season, a baby born with disabilities being rejected for awhile by his father.

Another episode also visited an institution for the disabled, and one of the newer Midwives is revealed to be disabled herself, and spent her childhood in one of those institutions. So, disability isn’t a new theme for “Call The Midwife”. And a disabled couple having a baby, of course, is both an important disability theme and a way in for a show that focuses on pregnancy, birth, and parenting. I don’t know how the story will go, but based on the show’s track record, I expect that the Midwives won’t be free of prejudice and misgivings, but will ultimately side with the disabled couple over whatever opposition they face. The nun Midwives, especially, often express old-fashioned, dogmatic views around their dinner table, but when push comes to shove, they fight like pit bulls for the women and babies under their care.

A couple of notes about the Mirror article itself … Did the writer go back and remove references to the actors “suffering” their disabilities? I skimmed this article last night and have a vague memory of noticing some rather unfortunate language in it. And the comments below suggest that the “suffers from” construction was used in the article, but I can’t find it. Finally, some of the adjectives used to describe the episode are borderline sensational or even offensive. I don't mind the writer saying that the pregnancy and birth on the show provoke "disgust" in the other characters on the show. That's a description of things that happen in the story. But when she characterizes the episode itself as "controversial" and "discomforting", that's commentary on how we, the viewers will process the story ... as if a disabled man and woman having a baby will push our buttons. Or, is she saying that we'll be disturbed by how others on the show will react to that? She's not clear.

By the way … if anyone reading this happens to be British, please don’t spoil the show for us Yanks!
Posted by apulrang at 1:40 PM No comments: