Odo and The Scientist 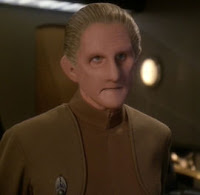 The show was Season 2, Episode 12 of the 1990s show Star Trek: Deep Space Nine, "The Alternate." The episode's main story concerns Odo, a regular character on the sci-fi show with highly unusual origins and biology. Odo is a Shapeshifter. He is, at this point in the series, assumed to be one-of-a-kind. His natural resting state is liquid, and, with practice, he can become anything that he wants, anything from an animal to a piece of furniture. Most of the time Odo functions as an adult humanoid, and is the Deep Space Nine station's head of security or "Constable."

In this episode, Odo reunites with Dr. Mora Pol, the Bajoran scientist who years prior had been in charge of studying him and helping him fit in with "normal" society. In previous episodes, Odo had hinted that being a research subject after being "discovered" was a mixed experience at best. He learned a lot about his origins and abilities, but quickly grew to resent being gawked at and essentially imprisoned in a lab, existing mainly to satisfy the well-meaning but rather insensitive scientists' professional curiosity. Dr. Mora claims to have loved and cared for Odo, but it’s not hard to detect layers of exploitation and condescension in his manner. 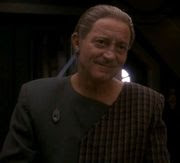 This theme is underscored by the tension between Odo and Mora when Mora visits the station. Odo behaves correctly but quite coldly towards Dr. Mora. Mora outwardly praises Odo's accomplishments like a proud parent or former teacher, yet all of his compliments come barbed with a vague disapproval, a sense that Odo has made poor decisions. He shouldn't have left the lab. He did a disservice to himself and the scientists by abandoning their research. And, most disturbing of all, Mora implies that Odo's acceptance by the other station personnel is superficial ... that as a Shapeshifter he is still someone apart, and in that sense really "belongs" with people like Mora himself, who really appreciate Odo and can help nurture his journey of self-discovery ... back in the lab, of course.

The relationship between Mora and Odo remind me of so many aspects of being an adult with disabilities, having grown up with disabilities, and the intimate but contentious relationships many of us have with doctors, therapists, teachers, and even our parents. People are rarely entirely selfless, or completely self-serving. The problem is that, like Dr. Mora, people in a position to help and care for disabled children and youth often have trouble acknowledging how personally invested they can be in our lives and decisions. Plus, their benevolence often comes across as paternalism, and a lack of full recognition of our agency, our personhood. On the other hand, we, like Odo, often find it hard to recover from old wounds, and have empathy for people who meant well, but made mistakes like all humans do ... and Bajorans for that matter. My sympathies are with Odo, but I do feel he was a bit too hard on Mora. Odo does want to learn more about himself and his origins. It’s just that he feels that the best way to do this is to live a normal and useful life, with all it’s variety and even danger. Mora thinks Odo should focus exclusively on himself, and essentially hide away in a safe place from a hostile world.

Even if you're not into science fiction shows, if you grew up with a disability or have spent part of your life treating, teaching, or raising a disabled child, watch this episode. It says more about the disability experience than most shows that are explicitly about disability.