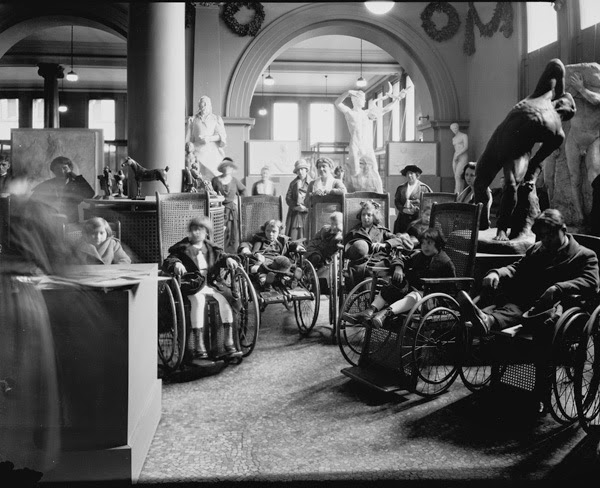 Students with disabilities visiting the Metropolitan Museum of Art in New York City, 1922.

From the Metropoitan Museum of Art, via the Disability Visibility Project.
Posted by apulrang at 7:18 PM No comments:

When Headlines Get It Wrong

Let's be clear, shall we? Six Flags and their rules kept the man from riding the roller coaster, not the man's disability. The disability had something to do with it, but it was the company's decision. Whether or not the decision was unjustified is another question. I suspect they are a bit too cautious, particularly when partial leg amputation imposes relatively little in terms of practical impairment. But either way, it was an institutional decision, not a natural consequence of disability. That is a huge conceptual difference that people often get wrong get wrong all the time.
Posted by apulrang at 6:52 PM No comments:

The Ice Bucket Challenge ... What's Next?

The other day I pretty much telegraphed that I wasn't going to argue about the Ice Bucket Challenge, and I'm sticking with that, more ore less. I have an idea though.

It's sort of a followup to the Ice Bucket Challenge that answers some of what bothers me about it, without contradicting or refuting it. Maybe if we find the right social media strategy it will catch on. Here's the idea.

We ask everyone who has participated in the Ice Bucket Challenge for ALS research to take an additional step ... a pledge that they will never again knowingly patronize a business that isn't fully wheelchair accessible.

Many people with ALS are wheelchair users. Encountering barriers to full, free mobility is one of the daily hardships of having ALS. So, in addition to helping fund better treatments for ALS, those who would also take the Accessibility Pledge would be helping people with ALS live better lives through equal access to their communities. One thing I like about it is that It sounds easy to promise, but it would force people to realize how difficult it actually is to stick with, because so many places are NOT wheelchair accessible.

It's also perfect for celebrities, because of the power they and their friends have to make an economic impact on businesses.

We could try to come up with a similar stunt to go along with it, but I don't think that would be necessary. We would be targeting people who have already done the Ice Bucket Challenge. We want to piggyback, not copycat. We want to say, “You have shown you care about people with ALS. Here’s another way you can help."

The first step is probably a Twitter hashtag, and maybe some parallel Facebook action, making sure to target celebrity Ice Bucket participants by name.

So, how about it? Can we get influential people to take the #AccessibilityPledge?
Posted by apulrang at 12:47 PM No comments: