Send this letter, or one like it, to President Obama and the U.S. Department of Labor:

"I join the Autistic Self Advocacy Network in thanking President Obama and Department of Secretary of Labor Perez for working to increase economic opportunity for all Americans. It is with this in mind that I also urge you to make certain that people with disabilities are not excluded from those efforts.

Workers with disabilities, including those now making less than minimum wage under Section 14(c) of the Fair Labor Standards Act, must be included in the President's forthcoming executive order on a $10.10/hour minimum wage for government contractors.

You can email this letter, and add your own thoughts and experiences if you wish, by clicking the link below. The automatic advocacy email setup is by the Center for Disability Rights in Rochester, New York, but it is intended for anyone who wants their opinion counted on this issue.

Advocates working on this say that it’s important to get letters and emails to the White House and Dept. of Labor by Monday.

As Dave Sutliff-Atias of the Center for Disability Rights said in an email on this issue,


"Fear is a powerful factor for many sheltered workshop proponents, but the vision of a better economic future and a life of one's own for those with disabilities is stronger."

Posted by apulrang at 6:53 PM No comments: Posted by apulrang at 5:27 PM No comments: 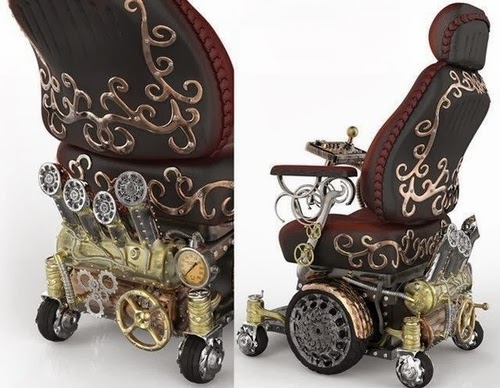 From the Gimp Tips Tumblr blog, via The Lame Dame.
Posted by apulrang at 4:27 PM No comments:

First a bit of context, then a few thoughts on this story.

The news segment mentions the New York State Justice Center for Protection of People with Special Needs. It is a relatively new program set up because of several years of shocking stories of abuse and neglect in New York State’s Developmental Disability service system, mostly cases of workers in group homes physically and / or mentally abusing people with developmental disabilities, including physical and cognitive impairments. What emerged from these stories was an apparent situation where problems were kept “in house”, and care workers were given the same kinds of appeal and job protection rights as, say, a unionized autoworker. In other words, “dealing with” abuse or neglect accusations too often meant reassigning someone to a different position, or a different group home, or putting them on paid leave until a review maybe did or maybe didn’t get to the truth of what happened.

I explain this because this case is a good sign that the new Justice Center is working. Someone apparently saw a cellphone video taken by one of the workers, and this person … presumably totally unconnected with and unfamiliar with the DD system ... was able to report the incident to the Justice Center, leading to real, consequential action. As terrible as the practices themselves were, this should in one sense be seen as a “good news” story.

As for thoughts on the story …

Not for the first time, I struggle to resolve whether this is mainly a story of individual evil and depravity, or about the kinds of incidents that crop up again and again in institutional care settings like group homes and nursing homes. I think it’s both, but news stories tend to focus almost exclusively on the individual evil, without questioning the system that allows it to happen or even maybe encourages it. The incidents I describe above that led to the Justice Center being set up were rare examples of a mainstream newspaper … The New York Times … actually connecting the dots and pointing out systemic failures.

The father of a developmentally disabled person who condemned the individuals but essentially defended the institution kind of broke my heart. If you make the decision to go for institutional care for a loved one, it’s got to be awfully hard to acknowledge that maybe the system itself is fundamentally flawed. Seeing individuals within the system do horrible things is terrible, but if you can maintain you faith in the system, then you can convince yourself that everything is going to be okay.

I’m not at all suggesting that this kind of abuse happens in every group home. I’m not suggesting that most group home workers are horrible, amoral, or cruel. What I am suggesting is that there are aspects of any hierarchal, bureaucratic institutional care models ... in which caregivers essentially have power over the people they care for, and the people with disabilities are “under” their care ... that help peoples’ worst instincts to flourish. I think it’s inherent in the institutional model itself. Abuse can happen with home care provided in your own house or apartment, but the power structure there is much, much simpler and easy to cut through if necessary.

On a surface level, it makes me ill to see that the group home in question is named, the “Independent Group Home Living” program. What a misuse of “Independent Living”.
Posted by apulrang at 12:52 PM No comments: