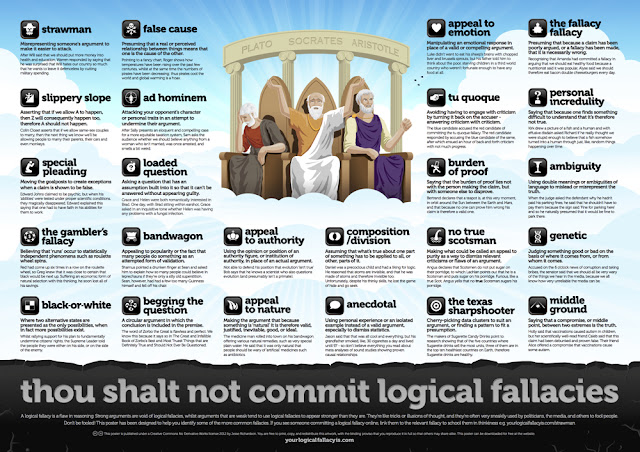 A couple of weeks ago, I was catching up on back episodes of a podcast called The Light Bulb, when I ran across one about logical fallacies. The hosts, Alastair Stephens and Lani Diane Rich were talking about them in the context of understanding popular culture, but I started thinking about how logical fallacies crop up in discussions about disability. Alastair and Lani referred to, Your Logical Fallacy Is, a beautifully designed website explaining the most common fallacies, with examples of each.

I am still struggling to think of how these mistakes in clear thinking happen specifically in disability dialogs. I’m sure they do happen, not just from non-disabled people arguing against the disability rights perspective, but within the disability community itself. I don’t think we are immune from deceiving others, and ourselves, even when we are basically right about disability matters.

Here are a few of the more obvious examples of disability-related logical fallacies:

Changing the definition of something in order to dodge a valid criticism. Otherwise known as moving the goal posts.

B: Well, I am autistic and I am articulate and mostly able to look after myself, so your idea of autism is too narrow.

A: You are articulate and competent, which means you can’t be autistic, so you have no authority to speak about autism.

Arguing that something is true simply because an authority says it is.

I’m not sure if this is a proper example of this or some other fallacy, but I always feel uncomfortable when we back up some argument about disability with the fact that we have disabilities ourselves. It seems like an Appeal to Authority to me. Of course, it works both ways. Medical and disability professionals are always relying on the power of their credentials to convince us that our instincts are wrong. The key in both cases is that it’s an Appeal to Authority when neither side bothers to make any other kind of argument, and just relies on authority alone.

A modest, acceptable step will inevitably lead to a much bigger, more obviously objectionable and unintended outcome later on.

The first example that comes to mind is Assisted Suicide. Those of us who oppose it … including me … often argue that more modest, narrowly-defined legalization laws that many people support would lead eventually to much broader practices that most people now would oppose. Today’s law allowing terminal cancer patients in intractable pain to end their lives, would lead to quadriplegics and other disabled people feeling pressured to die in order to save their families cost and trauma. It’s a fallacy because people are capable of making decisions between one type of thing and another, and the first step on a continuum doesn’t always lead inevitably to the last.

Arguments against disability rights laws like the ADA often include the Slippery Slope fallacy, too. Alarmists argue that prohibiting obvious and avoidable disability discrimination will lead to disabled people thinking they are entitled to do any kind of job they want … blind people flying passenger planes and the like.

As Alastair and Lani were quick to point out in their discussion, knowledge of logical fallacies is unfortunately often used as a rhetorical weapon to impress or intimidate opponents. It’s also easy to misuse these concepts to not only question other peoples’ ideas, but to destroy them and humiliate the people who have them. Harping on logical fallacies is just plain annoying ... a lot like mansplaining and ablesplaining. It’s also important to remember the Fallacy Fallacy … the idea that if an argument contains a logical fallacy, it must be wrong. Sometimes, the slope really is slippery. Sometimes authorities are right. Sometimes it's appropriate to change or clarify how something is typically defined.

The true value of knowing about logical fallacies is that they can help all of us become more aware of the most common ways we misinterpret the world and even our own thoughts and feelings. Being aware of them doesn’t mean being a slave to them. It does mean that we at least try, and some point, to put our thoughts and feelings through a bit of self-examination and critical analysis. We may or may not decide to change course as a result, but it’s always better to be a bit more aware of what we are doing … as well as of what other people are saying.

What are your “favorite” disability-based logical fallacies? What kinds of logical goofs do we, and our opponents, make most often?