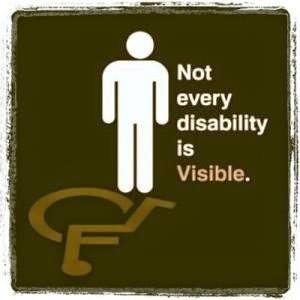 From The Life Of A Chronically Ill Babe Tumblr blog, via King Mom.
Posted by apulrang at 7:22 PM No comments:

At the rate I'm going, I anticipate uploading the next Disability.TV podcast sometime tomorrow.

In the meantime, here are a few links about the subject of tomorrow’s podcast … the new version of “Ironside”:

"This Ironside is a hunk (the bullet wound that took the use of his legs left him functional in other areas) and an iconoclast with his own special headquarters and team of detectives who get to play by their own rules and give heartburn to the traditional NYPD command. Despite a committed, angry performance from Underwood, and a very good one from Brent Sexton as Ironside's grief-stricken ex-partner, a lot of the show plays like a parody of hard-boiled cop show cliches.”

Check in tomorrow to see where I agree and disagree, a little less than a year later.

Also, don’t forget, you can subscribe to the Disability.TV podcast using iTunes or Stitcher.
Posted by apulrang at 2:59 PM No comments: