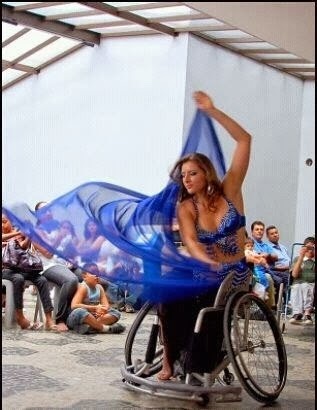 From the Disability Curious Tumblr blog.
Posted by apulrang at 5:20 PM No comments:

While I am sad that the new “Ironside” has been cancelled, I’ve been catching up on two TV shows that I put off watching for a very long time, that offer incredibly rich, textured, and I think realistic depictions of disability. I’m talking about “Friday Night Lights” and “Parenthood”.

"Friday Night Lights" begins with a high school football player becoming a quadriplegic. "Parenthood" starts with parents trying to understand their rather weird son, and soon finding out he has Asberger's Syndrome, a form of autism.

I'm only about 3/4 of the way through "Friday Night Lights" first season, but so far they have stuck with the injured player, Jason Street and his transformation through rehab. and integration in to a disability community centered on Quad Rugby. Meanwhile, his relationship with his girlfriend Lyla Garrity has occasionally flirted with old, disturbing tropes about disability, romance, and sex, but always realistically and never simplistically. At this point I would call the depiction of disability here generally positive, while at the same time it reminds us that disability stereotypes affect the minds and points of view of disabled people themselves, especially when they are newly disabled.

I've watched all of "Parenthood", up to the latest episode of the new season. I'm impressed with the Max Braverman character himself, but what's most interesting to me is how his parents deal with his Asberger's. Some of their reactions are predictable and played for melodrama. And while the perspective of the show seems to be that Max is a "good kid" with a markedly different way of thinking and interacting, we mostly get all of this through how others react to him. I'm still waiting for an episode where we literally get Max's point of view. However, whether intentional or not, I think the show also subtly demonstrates a key irony of the situation. Max's Asberger's appears to others to be a pathological form of selfishness. Yet, for tall their kindness and obvious love for Max, both his father, Adam and his mother, Kristina are actually more focused emotionally on their own wishes and needs in regard to Max. Kristina wants Max to go to a school dance he doesn't want to go to ... not really because she thinks he'll ultimately enjoy it or benefit from it, but because she has cancer and just wants to see her son do something normal and heartwarming. Adam keeps trying to get Max to take an interest in his job, and tries several times to arrange these sort of idealize "father and son" outings that Max couldn't care less about. This isn't constant, it's only occasional, but when things like this do happen we get to see how fundamentally "selfish" Max's parents are, even if neither they nor the show ever really say it. On a moment to moment, day to day basis, they are great with Max. Over almost 5 seasons, a more subversive message has crept out ... it's all about them, not really about Max.

Two more thoughts on both of these shows:

1. In both shows, the disabled characters and disability-centered stories are important, but not the sole focus. I think that's an important element of their success as disability depictions.

2. Neither of these shows got high ratings, but they are both considered high-quality, much admired shows, talked about among people who really love TV. Yet, very little of the talk has been about their disability themes. I'm not sure why that is.

I'd love to see more TV shows deal with disability, and I wish "Ironside" had been a better, maybe a more daring, challenging show. But, I think there's more good disability stuff already out there than we sometimes realize.
Posted by apulrang at 1:51 PM No comments: