Necessary But Not Sufficient

I heard a phrase the other day that struck a chord with me, that I think can help us deal with the idea behind that infamous Scott Hamilton quote:

“The only disability in life is a bad attitude.”

The phrase I heard was, “… necessary, but not sufficient.”

I think this more properly expresses the role of mental attitude for disabled people. Having a positive, optimistic attitude is probably necessary for achieving independence, happiness, or whatever is your definition of success. But attitude alone isn’t enough to overcome the real barriers we encounter. A positive attitude may be necessary, but it is not, by itself, sufficient.

Now, what constitutes a “positive attitude”? That is another question entirely.
Posted by apulrang at 4:46 PM No comments:

Oscar Pistorius: Which Kind Of Horrible Person Is He?

It has been a year and a few weeks since Oscar Pistorius was arrested for the alleged premeditated murder of his girlfriend, Reeva Steenkamp. The trial is finally fully underway, so we are hearing again about what was either a massively tragic accident, or a terrible, barbaric crime. I don’t have much to say that’s relevant to a disability blog, and only a few thoughts of any kind:

1. I am more persuaded than I was at first that it might really have been an accident. That Pistorius vomited in court on hearing the details of his girlfriend’s wounds doesn’t sound like the reaction of a deliberate murderer. In fact, his overall behavior in court seems exactly like how a person would react if they had accidentally killed their significant other in a bloody and gruesome way. I am not saying that I’d be ready to acquit him yet, but his story seems more plausible to me now than it did right after Steenkamp was killed.

2. If it was an “accident”, it certainly won’t be what anyone would call an “innocent mistake”. It seems like whatever else he is, Oscar Pistorius is a gun nut … and a reckless one at that. It sounds like he is exactly the kind of guy who loves to show off his newest firearm to friends, family, and maybe especially slightly horrified pretty women. Evidence mounts that Pistorius is the kind of guy who will act all reverent and masterly about his weapons, assuring people that they are perfectly harmless if you know what you’re doing … “See, it’s not loaded, here, I’ll show you …” BANG.

3. Also, I understand that South Africa has a lot of violent crime including “home invasions”, but what kind of siege mentality causes someone to fire multiple shots into a bathroom with a closed door, when you never actually saw who is on the other side … and you know your girlfriend is in the house with you?

So, unless he’s a cold-blooded murderer, or a man with a hair-trigger temper and a gun fetish, then he’s one of those massive assholes who mostly go through life doing no more damage than pissing people off, but who occasionally run into situations where their toxic obsessions, fears, and arrogance … plus the right weaponized tools … combine to produce life-taking and life-ruining results.

All of which probably has noting at all to do with his disability, or his athletic abilities. We say it all the time. Disability doesn’t make people noble or angelic. We come in all varieties, good, bad, and tragically stupid.
Posted by apulrang at 4:08 PM No comments: 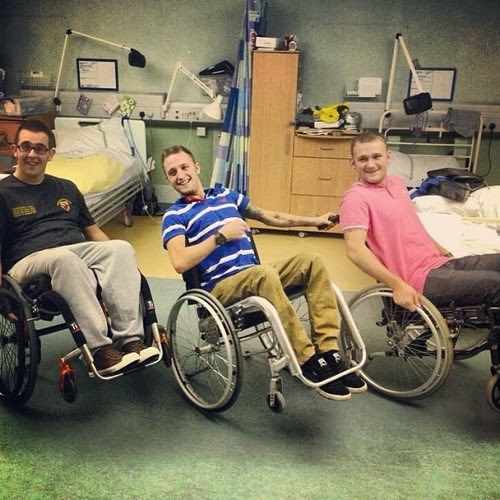 From the hot guys in chairs Tumblr blog

As I have noted before, there seem to be a lot more photos of women with disabilities looking amazing and sexy, than there are of men. Is the “selfie” trend mostly a woman thing?  I don’t know. In any case, that’s why I was so excited this morning to find this Tumblr blog, which is simply photos of men in wheelchairs, in a variety of situations, clothes, and moods. Thankfully, there are no captions, and no obvious point being made, other than to provide representation. Yes, there are all kinds of guys who use wheelchairs. Yes, they do all kinds of things. Yes, they have a variety of personal styles and attitudes. Here they are.

I think this gets at why disabled people who hate “Inspiration Porn” still post and share photos of disabled people. We aren’t inspired by the specific scenes, or by blandly positive slogans, so much as we are tickled to see so many different people with whom we share the disability experience. We don’t all work in the disability field, or have access to a large in-person disability community. Once in awhile, it’s helpful to see confirmation that the statistics are correct … there are a lot of us out there, even if we don’t meet other disabled people most days. And frankly, though I do enjoy looking at those photos of fantastic disabled women, I occasionally feel that the male disabled population is somehow missing from the Internet disability community.

“hot guys in chairs” is a welcome corrective.
Posted by apulrang at 3:04 PM No comments: