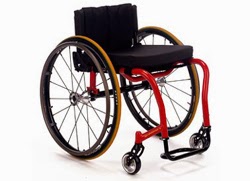 From the Cripple Fabulous Tumblr blog.

Please do click the link to read an example of why the phrase “wheelchair bound” is so inappropriate.
Posted by apulrang at 7:59 PM No comments:

What's The Deal With Autism Speaks?

This is the best collection of reputable links that explain why many people are upset with the well-known autism charity, Autism Speaks … that’s the organization whose logo is a blue puzzle piece. I particularly recommend the letter by John Elder Robison, in which he resigns from the Board of Directors of Autism Speaks. Criticism of the organization is particularly intense right now, because Autism Speaks is hosting a conference and Washington, DC lobbying effort this week.

I am not autistic. I don’t have children or other relatives who are autistic (that I know of). So why am I interested in this?

I think it’s important for as many people as possible to know that the nation’s most recognized autism charity has a very particular point of view that a great many people don’t agree with. It isn’t uncontroversial. You can support it’s goals and tactics if you agree with them, but don’t assume that because it’s about autism, and they have charity walks and things, that it must be good.

I think it’s important to hold all disability charities and organizations to a rigorous standard of conduct, and ask whether its goals and tactics are close enough to your views to support it.

I think that the debates between different understandings of autism provide important insight into the different ways all disabilities are experienced and understood.

Plenty of people without autism or a direct connection to autistic people support Autism Speaks. So, I don’t think it’s any more presumptuous for me to oppose Autism Speaks, or support an alternative autism organization I like better.

There IS at least one autism organization that I believe represents a better alternative to Autism Speaks … The Autistic Self Advocacy Network.

The resignation letter is beautifully written. It is also strong without being rancorous. Despite my lack of personal connection to autism, the letter moved me, particularly as a person with disabilities.
Posted by apulrang at 7:45 PM No comments:

This is a "signal boost" for a potentially valuable survey on employment and people with disabilities. I did it, and I encourage my readers to do so as well, especially those who have disabilities.

Survey on Employment and Disability.
Posted by apulrang at 3:21 PM No comments:

Nothing To Say Today!

I find myself at a loss for a story to tell this week. For some reason my childhood and youth feel very dull to me at the moment. I’m sure next week I’ll have something worth reading.
Posted by apulrang at 3:14 PM No comments: