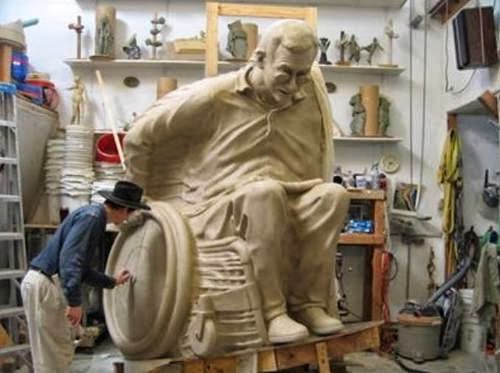 From the Just Rollin On Tumblr blog.
Posted by apulrang at 6:59 PM No comments:

Autism, Advocacy, and the Choices of "Parenthood"

I've been watching the NBC series "Parenthood" over the last few days. I wasn't even aware of it when it premiered in 2010, and it has sat in my Neflix queue for about a year. What finally prompted me to watch it was hearing that one of the main characters was a kid with Asberger's, though that's all I heard … I've neither heard nor read anything about whether it's a good, accurate, or helpful portrayal of someone on the autism spectrum. I finally caught the season premier a couple of weeks ago, and one of the first scenes I saw was with that character, Max Braverman (played by Max Burkholder). I was impressed enough to go back and finally watch the whole series from the beginning. It's a great show and I'll probably write more about it later this week.

One of the first season episodes featured the huge Braverman family participating in a fundraising walk for Autism Speaks. This to me was all at once not surprising, surprising, and disappointing. It was not surprising because I think that if you asked the average person to name an autism organization they'd name Autism Speaks, maybe especially if the people you are asking are entertainment industry professionals out to "do some good" … people that Autism Speaks has carefully and successfully cultivated.

It was disappointing because while the show, I think, treats autism / Asberger's with sensitivity and sophistication, those qualities aren't Autism Speaks' long suit. I don't claim to be an expert, but both my gut instinct and a fair amount of reading and inquiring lead me to view Autism Speaks as one of those most vexing of advocacy organizations … one which in the most general sense has good intentions, but whose unexamined prejudices and motivations lead them to arguably do more harm than good. Basically, Autism Speaks adamantly views autism as a "disease", it's primary goal is to cure it and / or prevent it

What could be wrong with that?

First let me say that I don't entirely buy the polar opposite argument, which is that autism is simply a matter of neurological difference, of diversity, and that "neurotypical" people view it as a disease because they refuse to understand it, and are angry because it annoys them and disrupts their lives. By this view, Autism Speaks is just one step shy of being a genocidal organization, and at best a group which claims to be "for" autistic people, which is really mainly interested in milking the frustrations and anguish of parents who can't believe the injustice of having a problematic child. As I say, I don't fully buy this, because I suspect that autism can be quite painful for people who have it as well, and not just because of other peoples' prejudices. But, in case you couldn't tell by my writing, I think this "pro autistics" view has some merit. At the very least, I think that Autism Speaks displays a rather shocking lack of self-reflection. It still hasn't corrected one of the most simple criticisms aimed at it ... that it doesn't have a single person on its Board of Directors or senior staff who has any form of autism.

Anyway, what would I have preferred to see "Parenthood" do rather than make a direct, after-show pitch for Autism Speaks? How about paring it with a pitch for the Autistic Self Advocacy Network, an organization with a different type of mission, founded by and for people who actually have autism spectrum conditions? So far, "Parenthood" appears to be at least acknowledging that autism isn't just a tragedy that happens to families, and that people with autism are full human beings, not noisy, out of control little machines that need to be fixed. Yet, they made the rather lazy, obvious choice not only to show the family promoting Autism Speaks … that would be believable given the organizations ubiquity … but encouraging support for it out of the show itself in real life so to speak, and equating support of Autism Speaks as support for people with autism.

I don't have it all figured out, but it would help to at least acknowledge that there's a difference of opinion on the subject.
Posted by apulrang at 6:42 PM No comments: