There will be relatively little on-air coverage of the Winter Paralympic Games, but I prefer to see the 52 hours of total coverage as a “glass half full” situation. Most importantly, the link above takes you to very good, easy to decipher charts showing exactly when and where you can watch live or taped broadcasts of each sport. It looks like the Opening Ceremony, several Sled Hockey games, and the Wheelchair Curling Final will all be shown during the day, and that NBC Sports Network will be doing a highlights show for each day of competition. Of course, you can see a bit of everything, mostly on NBC Sports Network, if you’re willing to get up in the middle of the night or super early in the morning.

NBC seems to be completely committed to the “human interest” approach to Olympic sports. It will be interesting to see if covering nothing but disabled athletes induces a full-on diabetic coma in all of the commentators. Or, will they go the other way and depict all the competitors as hard-bitten, fearless bad-asses?
Posted by apulrang at 8:49 PM No comments: 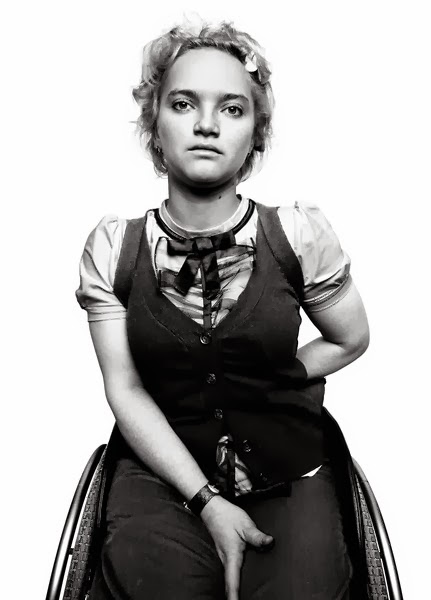 I saw this photo earlier this week, on the Disabled People Are Sexy Tumblr blog, and traced it to a Human Right Watch website on the disability rights movement in Russia. I set the photo aside and added the Human Rights Watch links to my link queue to read later.

I’ve been thinking a bit about the perception of Russia, prompted mostly by the Winter Olympics in Sochi, but also by Russia’s recently passed anti-gay laws, and more broadly, by the sort of back and forth confusion in Americans’ attitudes towards Russia I have seen since the end of the Cold War and the dissolution of the Soviet Union.

For one thing, people on opposite sides of the political spectrum in the U.S. have almost swapped sides in regard to Russia. American Conservatives spent the latter years of the Cold War trying to convince Liberals that Russia was the worst country in the world. Not only did they espouse the hated ideology of Communism, but as a people they were supposedly ugly, brutal, and backward. “All they respect is power!” we were told. Liberals, on the other hand, tended to try and reach out to Russia, to appreciate their history and literature, to put the Communist Revolution in historical context. We almost took the human rights problem for granted ... if not quite forgiven, then maybe a little excused.

Now, with Communism gone, some Conservatives seem to have a crush on Russia's current strongman, Vladimir Putin … he’s kind of a bad-ass, I guess. I, a Liberal watch Cossack policemen beating and whipping the brave but obviously unthreatening young women of Pussy Riot and really wonder, in a different way than Sting did in the ‘80s, whether, in fact “the Russians love their children too?”

All of which is just to say that I approached the topic of disability rights in Russia with all kinds of conflicting feelings, not all of them noble or fair. In short, I expected horror stories and ignorance in triple doses. What I’ve seen so far is more complicated.

With about half of the problems mentioned in the article, video, and website linked below … such as "Public buildings and transportation are often inaccessible” ... I thought, “That’s not so different from here in the U.S!” The other half, I thought, “Okay, that’s pretty bad. I don’t think that happens here … much.” We still see segregation into “special” classes in our schools, but a lot more than 2% of them are inclusive, mixing disabled and non-disabled students. And although peoples’ feelings and ideas about sexuality and reproduction can still be frighteningly discriminatory in the U.S., enforced abortion and sterilization are no longer considered anything like acceptable.

Still, the basic landscape and map of issues is pretty much the same in Russia as it is here. They need more buildings and public spaces to be accessible. Education needs to improve. People have negative attitudes towards people with disabilities that result in sometimes shocking acts of discrimination. It all sounds familiar. It’s just that it also sounds like Russia is maybe 20 to 30 years behind us on most things. That’s pretty awful for disabled people in Russia, but I’m not sure it’s boycott-worthy, or justifies any feeling of great American superiority on disability rights.

Except there’s one thing Russia has going for it that we don’t. Russia has signed the UN Convention on the Rights of Persons with Disabilities, and the United States hasn’t.

I have occasionally wondered whether the CRPD really matters anyway, since there is little anyone can do to enforce it in countries that sign it. It might be a cheap way for countries to score “credit” for being progressive on disability rights, without actually having to do anything about them. Having read more about the movement in Russia, however, I think the CRPD provides a valuable tool to compare words with deeds in a country that, leftover Cold War prejudices aside, does seem to have a problem following through on all the details of being part of the modern, democratic, egalitarian world. The CRPD provides a standard for Russia to meet. And, after all, unlike the pronouncements of the U.S. State Department, the UN Convention is something Russia chose to sign, so it will be hard for them to claim that disability rights measures are foreign impositions, incompatible with Russian culture and traditions.