Thinking About The Apple Watch, Drooling Just A Bit 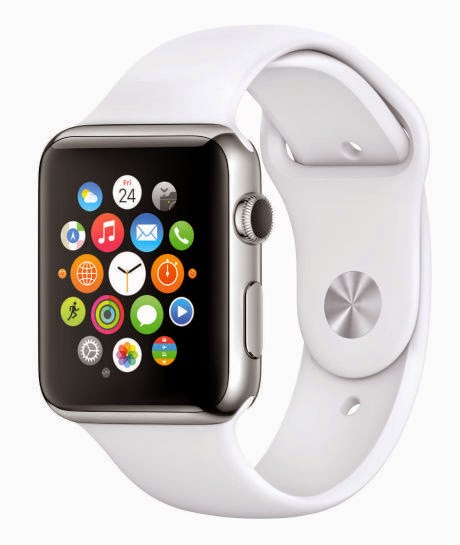 It does look like the Apple Watch might have a couple of advantages for disabled people over other “smart” devices:
1. You wear it on your wrist, so it’s probably easy to get to and hard to lose. You can also probably mount it in a dozen other creative ways ... strapped to a wheelchair armrest, hung on a chain around your neck, wrapped around a cane.
2. It's got those sensors on the back that can detect your heart rate, and motion sensors that can tell when you are standing, sitting, walking, running, etc. This suggests could monitor some chronic health conditions. If those sensors are possible, others might be not far off, like sensors for blood sugar (diabetes), oxygen levels (asthma), or maybe even mood.
An iPhone could be made that would accomplish these things pretty easily. Apple could add diagnostic sensors to the back. Third-party companies could sell all sorts of add-on straps and holders to secure the phone in a wide variety of situations and orientations. Still, the watch’s size and convenience may offer advantages no phone or tablet can match.
I doubt the Apple Watch as currently conceived and marketed will revolutionize life for disabled people, but it does seem like the kind of multipurpose gadget that creative minds could adapt and put to use in ways Apple might never have thought about.

For example:
Voice Output … It would be great to be able to record and store lots of phrases for daily use by people with speech impairment, easily retrieved and then played on the watch. It may already be able to do this in a rough sort of way, using the watch's speech to text feature. Note: There seems to be some ambiguity about whether VoiceOver will work on the Apple Watch. VoiceOver is a feature built into all current Apple devices that audibly “reads” whatever is on the screen, mainly for the benefit of visually impaired users. It seems to me very unlikely that VoiceOver wouldn’t work on the Apple Watch, but we’ll have to wait and see.

Voice Input … Siri comes standard with the Apple Watch, same as the iPhone, and you can control all of these devices with your voice, using Siri. A few tweaks here and there to Siri and maybe other apps, should easily make the Apple Watch fully voice operable. This could be extra helpful for people who can’t use their hands, or have difficulty working with really small displays and icons.
Environmental Controls … The Apple Watch will have a built-in app that turns it into a remote control for your TV and music devices. Could it be that difficult for someone to design an app that controls automatic devices … such as door and window openers, lights, thermostats, even an adjustable bed ... throughout a house or apartment? Environmental controls for disabled people have been around for years, but tend to be expensive and tied to very specialized and exclusive control systems. A wrist-based controller that adjusts to multiple systems seems like a natural.
Identification … The health app on the iPhone already has a feature that stores your personal medical information for emergency retrieval. A similar app could be easily designed to store information and helpful instructions for people with disabilities that sometimes impair communication and require help from random strangers, not just EMT and ER doctors.
Personal Emergency Response … Personal Emergency Response Systems already use pendants and watch-like controllers, so again, creating apps for these services should be easy. It may even have the basic capability of direct two-way verbal communication. At minimum, it seems capable already of sending a verbally dictated text message to anyone with a receiving app.

The Apple Watch is going to be expensive, and I’m not even thinking about the $10,000 gold “Edition” edition. But iPhones are expensive, too. The thing is these devices do more than one thing, which makes their higher prices a reasonable value, even for people without a lot of money. If programs like private health insurance, Vocational Rehabilitation, and Medicaid were to see the adaptive value of such devices, they might come within reach of people with even the highest adaptive needs, and lowest incomes.

Of course, there are also going to be features of the Apple Watch that are basically already fully available through other devices, either existing iOS apps, or websites any Apple device … or any computer device at all … can access. Once you see the thing as a platform more than a purpose-built device, the possibilities do seem endless.


So, I’m not buying an Apple Watch yet, but I know better than to say “never”.