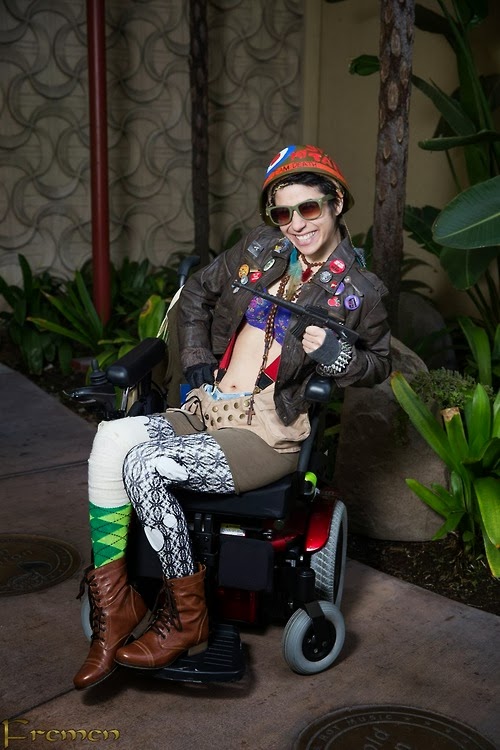 I’m not really into Cosplay, but this is really cool.

From the Just Rollin’ On Tumblr blog.
Posted by apulrang at 5:33 PM No comments:

Another "Today Show" Piece Has My Mind Spinning

I have so many mixed and contradictory feelings about this story about Nick Santonastasso, a 17 year old with a rare condition that includes having no legs and just one under-developed arm. The article is all over the map about Nick’s various activities, but the gist is that he’s a very outgoing guy who seems to have a personal mission or motivation to, in his words, “inspire” others. That’s where my mixed feelings begin.

As I’ve noted before, over-use of the word “inspire” or “inspirational” to describe disabled people is one of my “beige flags”. I find it annoying and I get so tired of it, but I can’t really say it’s offensive or wrong. Mostly I think it’s lazy shorthand for a sort of generic “positivity”, most often used by journalists who don’t know how to explain peoples’ feelings about disabled people who do neat stuff.

But here, it’s the disabled guy himself who uses the word most. He’s quoted using the word 6 times in the article, unironically and uncritically. It seems like its the word he chooses. For the record, other people … family, friends, coaches … are quoted using “inspiration” 3 times, and the article’s writer adds 3 more mentions. In total, the article contains 12 instances of some form of the word “inspirational”. I think that’s a lot. I think it suggests that the word is doing more than just filling a space. It’s standing for something meaningful to the people involved. I’m honestly not sure what that is, and notably, the article doesn't really explain what it means, either.

I’m also not sure what to think about Nick's whole zombie ambush routine. Is it brilliant and satirical for him to connect the very popular zombie theme with his particular kind of disability? Or, is he unwittingly putting on a freak show? Maybe it’s a little of both. We laugh because people are momentarily scared by his appearance, which Nick plays up for all its worth. Is it just funny in a “boo, I scared you!” way, or does it also remind us that people still have very primitive, caveman reactions to people who are “deformed”?

I wonder if Nick has thought about these things. He’s only 17. Maybe these are thoughts and inner debates he’ll go through in a few years. Maybe he’s not aware that a lot of his fellow disabled people are sick of being called “inspiring”. On the other hand, 17 isn’t 10. Maybe he knows exactly what he’s up to. Maybe “inspiring” is exactly the right word as far as he’s concerned. Maybe he doesn’t care what the rest of us might think about it. Or, maybe he’s just a kid like many others who gets a kick out of using social media to express himself and get a little bit famous.

Nick says in the article that he's never met anyone else with his condition, but that's because his specific condition is extremely rare. I wonder if he's met other physically disabled people ... amputees, wheelchair users? Or, does he get most of his signals on what it is to be a disabled person from non-disabled people, like his parents, teachers, and friends? How much of a difference might that make?

It’s hard to tell from just the article, but I have the feeling that Nick is off to a pretty good start as a thoughtful, disabled person ... but just a start. He may make a terrific advocate and peer mentor. He’s probably got a few unexpected realizations ahead of him. I hope if he does, that he comes out happy and positive in the end, with maybe a touch more sophistication and a clearer expression of what he's doing.
Posted by apulrang at 4:39 PM No comments:

Wonkblog Interview On Work And Disability

‘You work until you die:’ Inside America’s fragmented safety net for the disabled
Harold Pollack, Washington Post Wonkblog - January 24, 2014

This was a very nice surprise. I’ve never seen the intricacies of disability, employment, benefits, and “work incentives” discussed so clearly and accurately in a “mainstream” article.

I think that the key was structuring the article around an interview with an expert on disability, work, and benefits … someone who has disabilities and uses work incentives in his personal life. I even appreciated how Pollack asked Entwisle some personal questions about his disability. He asked carefully, respectfully, and with a purpose greater than intrusive curiosity. Starting with Entwisle’s day-to-day routines made the financial and policy details they were there to discuss more meaningful and real.

I found it interesting, too, that the interviewer, Pollack, immediately zeroed in on some of the illogical side effects of disability employment policy ... "disincentives" that people with disabilities have been complaining about for decades. Sometimes it's annoying when non-disabled people "discover" injustices we've known about for a long time. But somehow, this time, Pollack's surprise and bit of incredulousness just felt like a validation.

The only thing that made me a little uncomfortable is that Entwisle seems to come from a mindset where “employment” means well-paying, credentialed, white-collar employment. Since he’s a policy analyst, maybe that’s natural. But I do wish he had said more about people for whom “employment” means minimum wage, irregular hours, and sporadic employment. Maybe Wonkblog can do a followup interview someday to cover more bases.

If you want to understand how existing work incentives programs work, this is a very good place to start.

More of this please!
Posted by apulrang at 1:06 PM No comments: