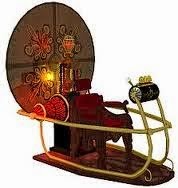 A year ago in Disability Thinking:

Sunday’s episode of Game Of Thrones (Season 5, Episode 4) included a surprisingly tender scene that moved me as a disabled person ... specifically as someone who grew up with disabilities from childhood.

The scene involved Stannis Baratheon, one of the contenders for the Iron Throne of Westeros, and his daughter Shireen, who’s face is deeply scarred by Greyscale, a deadly disease she caught as a young child. In the medieval culture of the show, Greyscale is viewed as dangerous and shameful, something like leprosy, and Shireen does spend most of her time all but hiddden away in her chambers. On Sunday’s show, she asks Stannis:

“Are you ashamed of me, father?”

I wish Stannis had started with a simple, “No.” Still, his reply was touching.

Stannis tells Shireen how a Dornish trader gave him a doll to give her when she was a newborn. The doll was contaminated with Greyscale, and she contracted the disease before this could be discovered. Stannis continues:


"I was told you would die, or worse, the Greyscale would go slow and you’d grow just enough to know the world before taking it away from you. Everyone advised me to send you to the ruins of Valyria to live out your short life with the stone men before the sickness spread through the castle. I told them all to go to hell."

"I called in every maester on this side of the world. Every healer, every apothecary. They stopped the disease and saved your life. Because you did not belong across the world with the bloody stonemen. You were the Princess Shireen of House Baratheon. And you are my daughter."

I read several “special needs parent” blogs, and this speech sounded familiar. There's a distinctive combination of obstinacy, pride, and a tinge of sadness. Obstinacy in a refusal to give in to perceived pressures to "give up on" a disabled child, pride in being a disabled child’s champion, and sadness at what the child has had to endure, with possibly some deeply buried parental guilt as well. As in real life, I have mixed feelings about these reactions. It’s hard to process the idea of being in any way a disappointment or source of regret for one’s parents, even if it’s layered over with love and devotion. Also, I noticed that Stannis' speech ends up being more complimentary of him than of Shireen herself. He never did directly answer her simple question.

On the other hand, I much prefer Stannis’ reaction to what we saw last season on the same show, in which Tyrion Lannister’s father, Tywin, finally revealed his true feelings. Like Stannis, Tywin “accepted" his little person son as part of the family, but grudgingly, more out of a sense of obligation than of love. Tywin is ashamed of his son Tyrion, and he admits to Tyrion’s face that he’d have preferred to drown him in infancy, but couldn’t "because you're a Lannister of Casterly Rock.” It parallels Stannis' declaration, but out of Tywin’s mouth, it rings hollow, a twisted form of family pride that Tyrion, for one, could do without.

The way parents accept their disabled children is subtle, and not always easy to assess from the outside. “Game Of Thrones” is remarkable in how it examines life with many kinds of disabilities. It also gives remarkable insight into the many ways families deal with disabilities.

According to this Facebook post, the actress who plays Shireen Baratheon has a disabilitty of her own, Osteogenisis Imperfecta. I wonder how her real life experience enriches her portrayal.