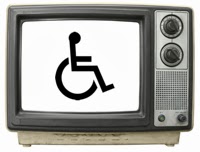 The third episode of this new series actually made me kind of angry, not because of anything disability-related, but because I never bought into the main conflict of the episode ... Eve's parents trying to stop her from taking photos of nude people in her Community Center photography class. I kept expecting Mike and Annie to realize how silly they were to object to this fairly standard part of learning artistic photography, but the turn never happened. Maybe this was meant as a fresh alternative to the "family realizes their daughter is growing up" cliché, but if so the device fell flat, because I disagreed with Mike and Annie's objections, and they never even explained their point of view.

On the plus side, Mike's impairments played no substantive role in any of the stories or scenes, while still being noticeable. The only time in the whole episode I laughed was at the single direct Parkinson's joke, but that was mainly a nicely-delivered one-liner. Mike throws a napkin at his son, Ian, who is texting at the dinner table:

"If that was Parkinson's, we're cool. If not, what the hell Dad?"

Otherwise, Mike Henry's Parkinson's is just there in Mike Henry's body language and voice. Neither of which are distracting, but I don't "forget" about them, either.

Over time, this approach, with an occasional Parkinson's-centered plot thrown in, can really help "normalize", de-mystify, and de-romanticize this kind of disability. The show has to be funny though to survive, and it's got to make sense, both of which it mostly failed to do this week.
Posted by apulrang at 1:21 PM